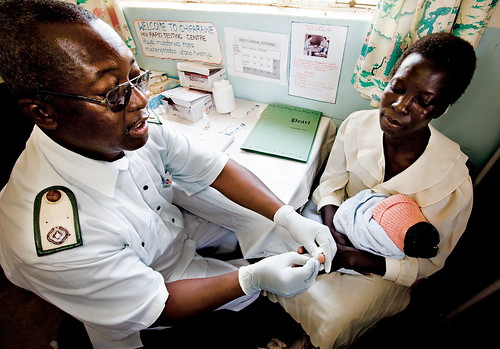 Photo by DFID – UK Department for International Development via Flickr

As an IBCLC, I’m always thrilled when a new study comes out and affirms what I already know about human milk – that it’s amazing and we’re constantly learning something new about it.

Last summer, one of the first classes I took toward my Master of Public Health was Introduction to Epidemiology. Because it was online, class discussions were held to a strict standard – our professor required us to back up any claims with peer-reviewed evidence.  No matter what the topic was, I did my best to bring it around to breastfeeding, often to the chagrin of the other rising students of public health, who learned quickly just how much they didn’t know about breastfeeding. Naturally, no class about epidemiology (according to Merriam-Webster: the study of the incidence, distribution, and control of diseases in a population) would be complete without discussions of HIV, but the topic of HIV and breastfeeding wasn’t one I ever needed more than an elementary understanding about, given the population I serve as an IBCLC.

A classmate remarked that while breastfeeding might be the best thing to do for most mothers in most parts of the world, in nations where the prevalence of HIV is high, only those mothers with access to highly-active anti-retroviral therapy (HAART) were advised to breastfeed. She had worked with a population that was not advised to breastfeed their babies, and was frustrated by the fact that access to uncontaminated water (both for mixing formula and for cleaning feeding vessels) was nearly as difficult as access to the HAART drugs – making minimization of all risk impossible for these babies born to HIV+ mothers. I had read that, for HIV+ mothers, exclusive breastfeeding, rather than mixed feeding (breastfeeding plus formula) was the safest way to feed her infant, perhaps due to the protective effect of SIgA and other human milk components on the infant’s gut (shown by reduced incidence of transmission in the exclusively breastfed groups in studies cited below). However, a newly-released study offers another explanation, one that adds to the “wow factor” of human milk: antibodies in the milk of HIV-infected mothers actually help neutralize HIV itself.

The study by Friedman, et al. at Duke University in North Carolina, U.S.A. is part of ongoing efforts to develop a vaccine against HIV. Researchers isolated an immunological component of colostrum of HIV+ mothers – HIV-specific B-cells, and noted that they neutralized the virus.

Breastfeeding should then only stop once a nutritionally adequate and safe diet without breast milk can be provided (WHO, 2010.)

In many developing nations, the criteria “nutritionally adequate and safe” are not possible to meet; therefore, exclusive breastfeeding remains the most protective method of feeding an infant, even one with an HIV-infected mother; the risk of illness or death from causes related to the replacement feeding methods are significant in these areas of the world. Guidance from the Centers for Disease Control (CDC) in the United States mirrors this, but presumes the availability of replacement feeding that is acceptable, feasible, affordable, sustainable, and safe.

While it could be part of the explanation for why the vast majority (over 90% in some studies) of exclusively-breastfed infants of HIV+ mothers do not contract the virus, the discovery of HIV-specific B-cells in the colostrum of HIV-infected mothers is not yet the “green light” for exclusive breastfeeding for all; however, it offers promise toward understanding and hopefully, gaining the upper hand on HIV transmission rates not just for babies, for entire at-risk populations.

How can we best support mothers to reach their breastfeeding goals?
Journal of Human Lactation Launches New Podcast Feature!

7 Responses to Does Breastmilk Neutralize HIV?