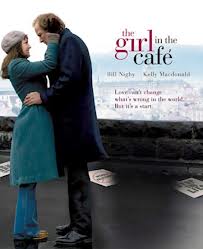 One of my favorite movies is The Girl in the Café. It is a quirky, and somewhat improbable love story between two very lonely people, Lawrence and Gina (played brilliantly by Bill Nighy and Kelly MacDonald), who meet by chance in a café in London. Lawrence works for the Chancellor of the Exchequer (the minister of economics and finance) in Great Britain. His team is preparing to attend the G8 Summit with the other world leaders. On impulse, he invites Gina to accompany him to the G8, and she learns about the Millennium Development Goals for the first time. What she learns becomes the central focus of the rest of the movie.

In 2000, 189 heads of state issued the UN Millennium Declaration, which was a plan for countries and development partners to work together to reduce poverty and hunger, tackle ill-health, gender inequality, lack of education, lack of access to clean water, and environmental degradation. They established eight Millennium Development Goals (MDGs), with targets set for 2015. One of the most important goals is MDG 4: Reduce child mortality.

According to the World Health Organization, infant and young child feeding is a key area to improve child survival. The first two years of a child’s life are particularly important, as optimal nutrition during this period will reduce morbidity and mortality, reduce risk of chronic diseases, and lead to overall better development. “In fact, optimal breastfeeding and complementary feeding practices are so critical that they can save the lives of 1.5 million children under five every year.”

UNICEF also made a similar statement regarding deaths from pneumonia and diarrhea, the two most-common causes of child death worldwide.

We know what needs to be done. Pneumonia and diarrhea have long been regarded as diseases of poverty and are closely associated with factors, such as poor home environments, undernutrition, and lack of access to essential services. Deaths due to these diseases are largely preventable through optimal breastfeeding practices and adequate nutrition, vaccinations, hand washing with soap, safe drinking water and basic sanitation, among other measures.

Does MDG 4 Apply to Mothers in the U.S.?

Yes, you might say, breastfeeding is important in the Third World, but not really critical in the U.S., where “safe” alternatives abound. Of course, I’ve heard all this before. But consider this. The U.S. now ranks 41st in infant mortality.  In other words, our
babies are dying too. What is particularly concerning is the large disparity by ethnic group.

According to the Centers for Disease Control and Prevention, African Americans have 2.3 times the infant mortality rate as non-Hispanic whites. They are three times as likely to die as infants due to complications related to low birthweight as compared to non-Hispanic white infants.

Now for some good news. As Tanya Lieberman shares in a blog posts for Best for Babes, the answer to this problem right in front of our face.

Evidence is accumulating that not only does following the Ten Steps improve breastfeeding success rates in general, it actually eliminates or significantly reduces race-based disparities.

One study of Baby Friendly hospitals in the U.S. found that “breastfeeding rates were not associated with number of births per institution or with the proportion of black or low- income patients.” In other words, whether you had a large or small population of women who were African American, breastfeeding outcomes were the same. Disparity? Poof!

Here’s another study, of Boston Medical Center, which became a Baby-Friendly Hospital in 1999. The rate of breastfeeding among African American women went from 34% in 1995 to 74% in 1999. Yes, that’s super impressive on its face. But consider this: the overall breastfeeding rate went from 58% to 78%. So that means African American mothers were within 4 percentage points of the overall hospital rate. A study found that, “Among a predominantly low-income and black population giving birth at a U.S. Baby-Friendly hospital, breastfeeding rates at 6 months were comparable to the overall US population.” Disparity? Gone, baby, gone.

In the climactic scene in Girl in the Café, Gina makes an impassioned speech to the
assembled world leaders (shortly before she is removed from the gathering), pleading with them to do something to help. She points out that one child dies of extreme poverty every three seconds. She snaps her fingers and says, “There’s one….and another…and another.”

We can make a similar statement. If we consider the WHO estimate of 1.5 million infant and child deaths annually, we can say that one child dies every 21 seconds due to lack of breastfeeding. “There’s one…and another…and another.” In the time it takes me to complete a 60-minute lecture, 171 children have died. With the U.S. ranking 41st in the world in infant mortality, this problem is not just “out there.” It is at our door as well.

We have made wonderful strides in 2012 in improving breastfeeding rates. It’s been an excellent year. Not surprisingly, there has also been a backlash. When people claim that this is matter of “upper-class white women” interfering needlessly in the lives of patients and trying to deny them “choice,” I hope you will see that they have truly missed the point. We need to continue to hold the line and remember what we are really fighting for. I long for the day when we can no longer say “there’s one…and another…and another.”

Wishing you a happy and healthy 2013. Thanks for fighting the good fight.

Kathleen Kendall-Tackett, Ph.D., IBCLC, FAPA is a health psychologist and board-certified lactation consultant. Dr. Kendall-Tackett is Owner and Editor-in-Chief of Praeclarus Press. She is a research associate at the Crimes against Children Research Center at the University of New Hampshire and a clinical associate professor of pediatrics at Texas Tech University School of Medicine in Amarillo, Texas. She is Editor-in-Chief of the journal, Clinical Lactation, a Fellow of the American Psychological Association, and is president elect of the APA Division of Trauma Psychology. This post is a preview of her editorial in the Vol 3-4 of Clinical Lactation. You can read more about Kathy at www.KathleenKendall-Tackett.com.

6 Responses to One Every 21 Seconds: Let’s Remember What We are Fighting For