During World Breastfeeding Week 2013, we will be highlighting the work of lactation professionals in each of the 5 Circles of Support mentioned in this year’s theme ~ Breastfeeding Support: Close to Mothers. Each weekday during this celebratory week, we will be shining the light on innovative and exciting models of care in each of these areas. Check back everyday for more encouraging examples of breastfeeding supporters being close to mothers. 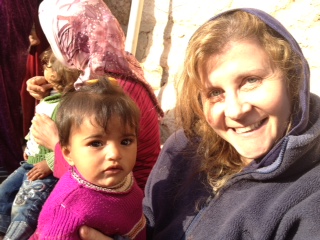 Ali Maclaine is currently the Senior Humanitarian Nutrition Advisor for Save the Children based in London. Save the Children works in 120 countries worldwide and in many of the emergency affected countries, they are undertaking breastfeeding support through their Infant and Young Child Feeding in Emergencies (IYCF-E) program. The level of support varies from messaging, group education sessions, or peer support to one-on-one counseling. As well as providing support themselves, Save the Children often works with partners and undertakes trainings so that others can also learn about the life-saving importance of breastfeeding, especially in emergencies. She shared with us the following responses.

This year’s World Breastfeeding Week theme is “Breastfeeding Support: Close to Mothers”. The organizers have identified 5 Circles of Support that are critical for breastfeeding mothers in our world and one of those circles is “Response to Crisis and Emergency”. Can you describe for us a bit about the work you are currently doing in the field of lactation to support breastfeeding mothers in crisis? How did you become involved in this work? When emergencies happen, what might a day of support look like?

Following the completion of my Masters in Public Health Nutrition, I was a Consultant on a report called ‘Cracking the Code’ that looked at violations of the International Code of Marketing of Breastmilk Substitutes worldwide. This work increased my interest in breastfeeding. My first field placement with Save the Children was following the 2006 conflict in Lebanon. I saw how an influx of donations of breastmilk substitutes were undermining breastfeeding. I also saw the effects of common myths and misconceptions on breastfeeding and the lack of skilled breastfeeding support. During that crisis and in all the others I have worked in subsequently (Philippines, Indonesia, Haiti, East Africa, Syria, etc), the thing that I see is that breastfeeding mothers and their support circle often do not know how robust breastfeeding is. They instead seek formula to ease the burden of the breastfeeding. Many kind hearted people give formula as they want to help babies in emergencies but are not aware of the risks of artificial feeding during an emergency. Breastfeeding saves lives.

However, I have also seen many mothers who have sought breastfeeding support during emergencies and have not been able to find it – either the health workers have disappeared, are too busy, or they are not trained about the emergency aspects of breastfeeding. They often repeat the normal breastfeeding messages which do not have the impact or relevance during an emergency. For example, families are often encouraged to exclusively breastfeeding for 6 months when, in reality, they simply need to get through the next 24 hours while caring for their family in a shelter.

Where we have the funding to have dedicated IYCF-E activities, we are able to provide key messages to mothers and into the wider community. We also provide mother-baby caravans/areas where mothers can go to breastfeed, meet other mothers and access skilled breastfeeding support, as well as be a part of educational sessions. There is also support for relactation and wet nursing.

The World Breastfeeding Week organizers stated “This circle of support represents the need for support if a woman finds herself in an unexpected and/or serious situation, with little control. Situations that require special planning and support could include natural disasters, refugee camps, divorce proceedings, critical illness of mother or baby, or living in an area of high HIV/AIDS prevalence with no support for breastfeeding.” Can you expand a bit on what some of the unique challenges are that breastfeeding women and babies who are in crisis face?

Breastfeeding women and babies have a number of challenges during emergencies:

Save the Children is creating an IYCF-E Toolkit, which it is hoping to get input in from other NGOs including those from the IFE Core Group which should ensure that we can provide breastfeeding support in a quality way quickly in emergencies. We also have partners who have undertaken work on the psycho-social support needs of breastfeeding mothers in emergencies that all agencies are trying to learn from.