By lactationmatters on 20 May 2014 in Uncategorized 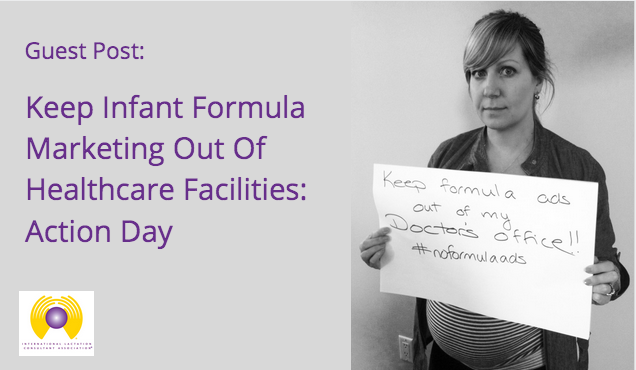 In 2012 Jennie Bever Babendure, PhD, IBCLC, a mother, IBCLC in private practice and breastfeeding research scientist, became an overnight advocate for the protection of mothers and children from predatory marketing practices. It happened after she learned that the representative for the World Health Organization (WHO) in the Americas, the Pan American Health Organization, had accepted $150,000 from infant food manufacturers Nestlé.

Jennie spearheaded a social media campaign that drew global attention to the need for all who work in maternal and infant health to speak out about predatory marketing practices that erode breastfeeding.

[editor’s note: We often hear confusion at Lactation Matters between the marketing of infant breastmilk substitutes and the availability of these substitutes for families who, for whatever reason, need them. Jennie’s work, and that of others who uphold the WHO’s  International Code of Marketing of Breastmilk Substitutes, focuses exclusively on marketing. To learn more about the impact of predatory marketing on families, check out this piece by Norma Escobar here or this video from Public Citizen here.]

Shortly after Jennie’s campaign drew attention to Nestlé’s involvement in funding health campaigns in the Americas, IBFAN Latin America denounced Nestlé’s sponsorship of the hiring of 15,000 women to give nutritional advice on infant feeding in Mexico. The IBFAN action comes on the heels of a successful move in the US to curb infant formula advertising in hospitals by banning the distribution of infant formula giveaways to new moms.

The success of these efforts, such as those in New York City and the state of Massachusetts, means moms in those states are no longer exposed to formula gift packs in hospitals. A 2012 survey by Best for Babes found the practice is declining, and a 2013 survey by Public Citizen and Ban the Bags has found top-ranked hospitals in the US no longer distribute infant food product manufacturer gift bags.

Public Citizens says 75 percent of hospitals in the US still distribute formula gift packs. And many mothers are finding they are targeted before they even get into the hospital to give birth. Advertising that targets pregnant women by offering prenatal education in conjunction with formula giveaways at doctor’s offices and ultrasound clinics is on the rise.

Jennie learned this first hand during her second and third pregnancies. I interviewed her as she prepares to join families who are responding to Public Citizen’s call for a Day of Action to end infant formula advertising in hospitals and health clinics. After the interview, learn more about the Day of Action and about efforts worldwide to support breastfeeding families by reducing predatory marketing.

Jodine Chase: As an IBCLC who has worked as an advocate to end predatory marketing, you are very aware of the tactics that infant food product companies employ to increase their market share. But you’re also a mother expecting your third child. During this pregnancy what marketing tactics were you personally exposed to?

At 10 weeks into this pregnancy, my husband and I went in for our first prenatal visit. A medical assistant handed us a “gift bag” when she ushered us into the exam room. While we were waiting to see the nurse practitioner, my husband opened the bag and started pulling things out. Along with information from the obstetrician on diet and scheduling our visits, there was a small makeup bag from Abbott containing samples of their Prenatal vitamins along with an invitation to join the Similac Strong Moms website, as well as a portable cooler bag from Mead-Johnson with the label “Powdered Formula for Nursing Moms,” with a can of powdered Enfamil newborn formula. 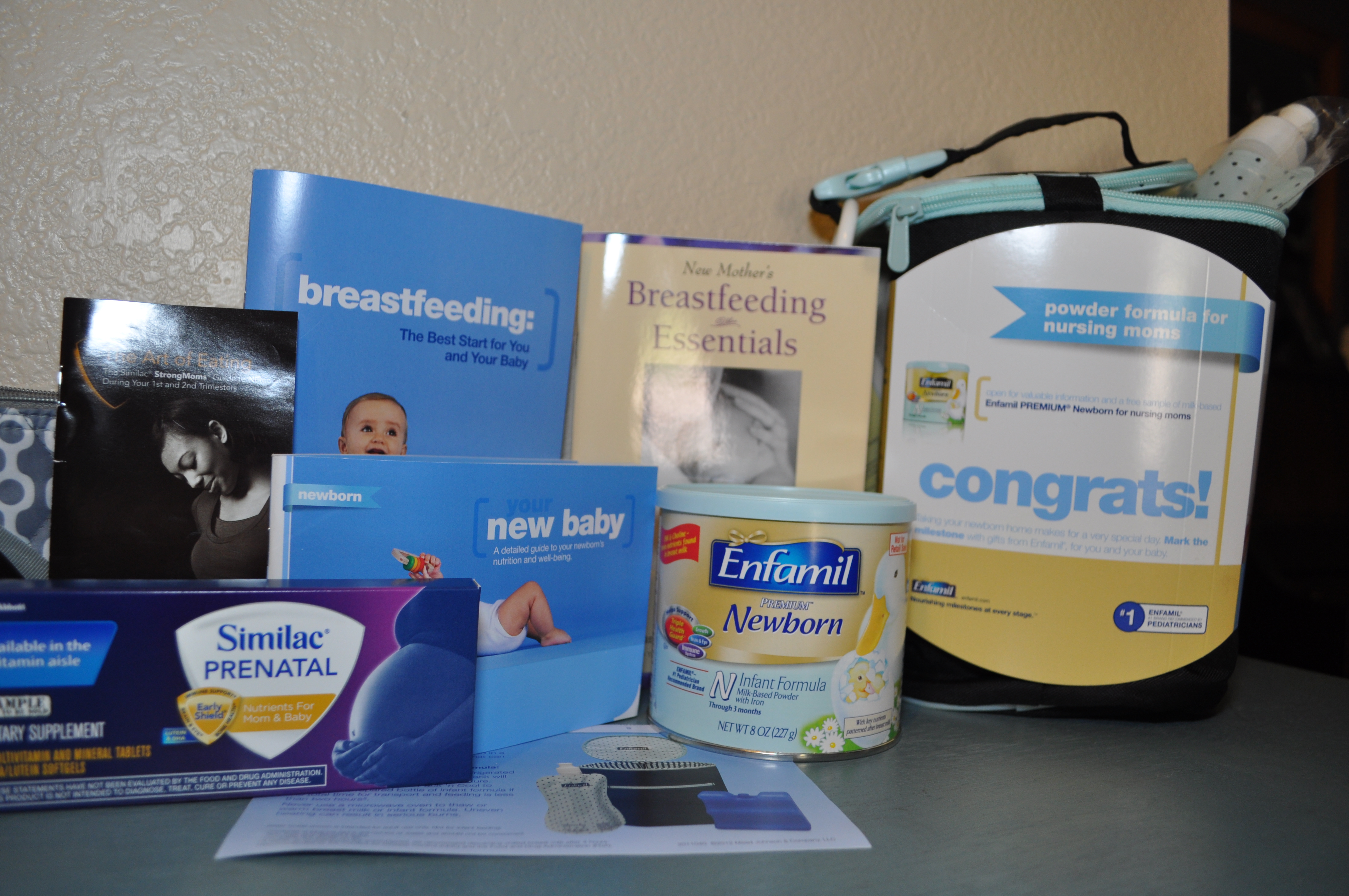 The Enfamil package also contained 2 Breastfeeding Guides: the “New Mother’s Breastfeeding Essentials” with a label from the American Academy of Pediatrics and “Breastfeeding: The Best Start for You and Your Baby” produced by Enfamil. My husband was perusing these guides with the bottles of formula on his lap when the medical assistant re-entered the room. When he asked her how giving formula to new moms was supposed to support breastfeeding, she gave a wry smile and said, “Yeah, that is a little strange, isn’t it?” When he further queried how these things ended up in the bags, she said, “Well, the reps bring us lunch along with boxes of these samples, and we put whatever they give us in the gift bags for moms.”

We had our next visit at another office of the same practice. On the front counter was an 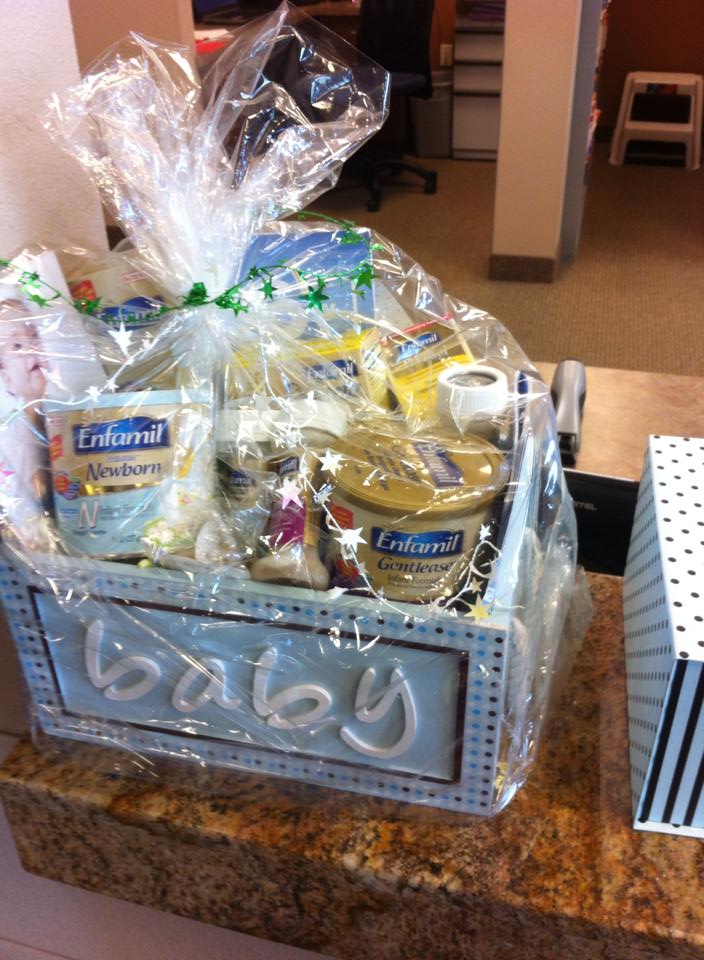 11×14 gift basket filled with every type of formula Enfamil makes, wrapped up in cellophane with a bow on top. Looking at this, my 7 year old son asked me “Mom, what is that doing there? Aren’t they supposed to help moms breastfeed?”

2) Was it easy for you to see how the ad campaigns are designed to undermine breastfeeding?

This one is tougher, as the formula companies have gotten very slick at marketing themselves as supporters of new moms. They’re so slick that they’ve obviously got many healthcare providers convinced that they are only providing free samples to help, not to hurt breastfeeding.

By providing booklets about breastfeeding, breastfeeding support phone numbers and saying “breastfeeding is best” at every turn, they make it look like they’re really out to help moms, and only step in when needed. But how can you support breastfeeding by giving moms cans of formula?

The formula companies are very aware that putting formula into a mom’s hands makes it more likely she will use it. Having a physician or hospital give the formula samples to moms makes it look like a health recommendation.

In my second pregnancy I received 8 cans of formula by mail and over 200 advertisements/coupons for formula. I definitely didn’t need my healthcare providers to hand me more of this in the guise of breastfeeding support.

3) Did you ever find the tactics influencing or swaying you personally?

No, but I was very lucky. I delivered my first baby with a midwifery practice that was affiliated with a Baby-Friendly Hospital, and was not given any formula marketing material by healthcare providers or the hospital. Perhaps that is why receiving such a huge amount of these materials so early in my 2nd and 3rd pregnancies really shocked me.

Like many new moms, I really struggled with breastfeeding my first, who was a little early and had lost some weight. If I had been handed samples of formula by my midwife or hospital, I might have considered using it.

4) What do you see that a woman expecting her first baby may not have noticed? What do you want pregnant women to know about these practices?

There is nothing altruistic about these samples the formula companies provide, they are a wise investment in future sales. Yes, some moms and babies may need or want to supplement, but the formula marketing is aimed at all moms, setting them up to expect to need formula and doubt their abilities to breastfeed before they even start.

The only way for us to stop this from happening is to speak up. With enough pressure from consumers (us!!), the hospitals and healthcare facilities will get the message.

5) What will you be doing on Public Citizen’s Day of Action?

I have already signed Public Citizen’s petition. Since I can’t be there to help deliver the petition in person, I will be posting pictures of myself and my sons on social media asking healthcare facilities to stop acting as marketing arms for the formula companies. My older son is already very aware of these tactics, and I’m proud that he is learning to be skeptical of marketing campaigns. My hope is that by the time he has children, formula marketing in healthcare facilities will be a thing of the past!

Public Citizen, a nonprofit organization dedicated to championing citizens interests in the face of corporate abuse, is calling on infant formula makers to stop using hospitals and healthcare providers as marketing tools.

A Day of Action takes place on May 21st, both on social media and at Mead Johnson’s Chicago headquarters. Mothers holding hand-made signs with messages like “no ads in hospitals,” “keep ads out of my doctor’s office” and “follow the WHO Code” will be posting their pictures and videos on social media. They’ll be sharing on the Facebook event page as well as on Twitter and Instagram with the hashtag #NoFormulaAds. And thousands of people have signed the petition for Public Citizen to delivery to Enfamil maker Mead Johnson. The petition currently sits at over 17,000 signatures, with more rolling in each day.

The Public Citizen campaign focuses on changing practices in the United States. The marketing of infant formula impacts families worldwide. To learn more about efforts around the world, check out the links here.

Jodine Chase owns a public relations firm that specializes in news analysis for a select clientele. She is the curator of Human Milk News and with her husband has parented eleven children and stepchildren. She has three grandchildren and two more on the way, and she wants infant food product companies to stop targeting her daughter Rose and her unborn granddaughter (photo) with unethical marketing campaigns. She joined the Best for Babes Foundation board in 2014 to support the BfB C.A.R.E.-WHO Alliance, and she helps run INFACT Canada ‘s Facebook page. She is a founding member of the Breastfeeding Action Committee of Edmonton (BACE).

Do you have a story to share about your efforts to enforce and/or enact the WHO International Code of Marketing of Breastmilk Substitutes in your country? Would you like to share it at Lactation Matters? Please e-mail us at media at ilca dot org.