By lactationmatters on 18 August 2014 in JHL article 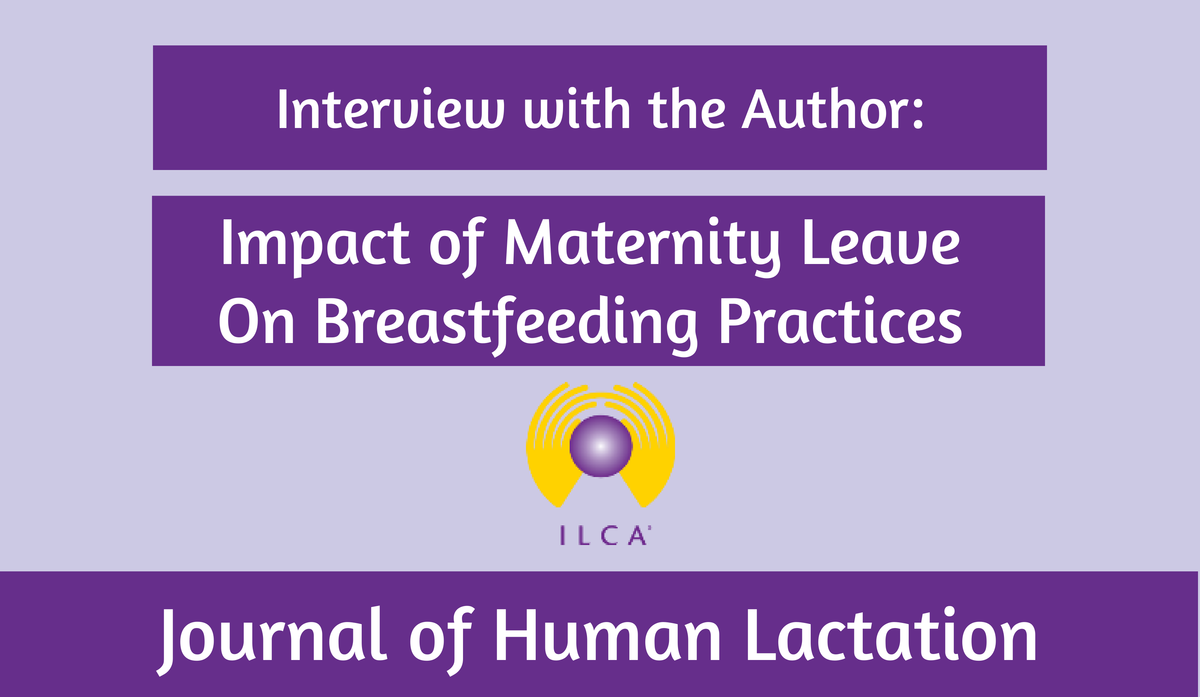 Editor’s Note: Leigh Anne O’Connor, a U.S. based IBCLC in private practice who often works with mothers planning to return to work, recently interviewed Kelsey R. Mirkovic, one of the authors of the recently published study on the impact of maternity leave on breastfeeding outcomes. Read on to learn more about the outcomes, study design, and more:

The study showed that employment can be a barrier to breastfeeding outcomes. This reiterates the importance of public health policy and its role in supporting employed breastfeeding parents.

I interviewed Kelsey R. Mirkovic, PhD to learn more about this study.

Here is what she had to say:

What were the key findings of your research?

We found that even among mothers who planned to breastfeed for more than three months, that those who returned to full-time work any time before three months were less likely to meet that intention.

Were there any big surprises for you and your team?

What compelled you to do this study?

Was there any intervention for any of the parents with an IBCLC?

In this study we did not consider mothers experiences with an IBCLC.

What definition is used for breastfeeding? Partial or exclusive? Was the definition a consideration?

In this study we focused on any breastfeeding as an outcome. We considered looking at exclusive breastfeeding as an outcome; however, in another paper published using the same group of women, it was shown that even among mothers who planned to exclusively breastfeed, many infants were supplemented with formula within the first month. Because this happened so early, we thought that other barriers to breastfeeding were likely contributing to the early supplementation, such as hospital practices or lack of peer or professional support.

What are your hopes with this study? What outcomes on a national public health policy do you see occurring?

It is important for public health policy to support women who choose the healthiest option for feeding their infants and we hope this study will contribute to the growing evidence that returning to work earlier may reduce a mother’s ability to meet her own intentions for infant feeding.

Do you see this study as a tool to change policy?

At CDC, we are dedicated to conducting research that will inform public health policy and we believe this study will contribute to the growing evidence that longer maternity leaves and/or part-time return schedules may increase breastfeeding rates and have important health benefits for mothers and infants.

If you could do the same study again, what would you change about the methods used in this study?

The Infant Feeding Practices Study II (IFPS II) was a very valuable and comprehensive study that followed expectant mothers from the 3rd trimester of pregnancy through the first year of their child’s life. This study asked mothers a number of questions about infant feeding and infant care practices. Because this study was not primarily focused on maternal employment, only a few questions were asked about the new mothers’ work. It would be very interesting to know how much maternity leave each mother had available and why she returned to work when she did; and if she would have taken a longer maternity leave if she could have received pay during her leave. It would also be very interesting to know if the mothers who did not meet their three-month breastfeeding intention perceived work as a major barrier to breastfeeding as long as they had planned.

Did you find that the parents who planned to breastfeed for a shorter duration did, in fact, return to work sooner?

What would you like to add that was not included in the final printed research?

This study focused on a breastfeeding duration of at least three months. However, the American Academy of Pediatrics recommends continued breastfeeding for the first twelve months or longer and it is important to support and encourage mothers to breastfeed as recommended.

Leigh Anne O’Connor is a Private Practice Lactation Consultant, La Leche League Leader and mother of three. She lives and practices in New York City. She writes at www.mamamilkandme.com. You can learn more about her work at www.leighanneoconnor.com

Dr. Kelsey Mirkovic works as an epidemiologist for CDC in the Division of Nutrition, Physical Activity, and Obesity, where she focuses her work on infant feeding.  Her current research activities have focused on how topics related to maternal employment influences breastfeeding behaviors and how we may support more working mothers successfully breastfeed.