By lactationmatters on 1 December 2014 in ILCA Webinars 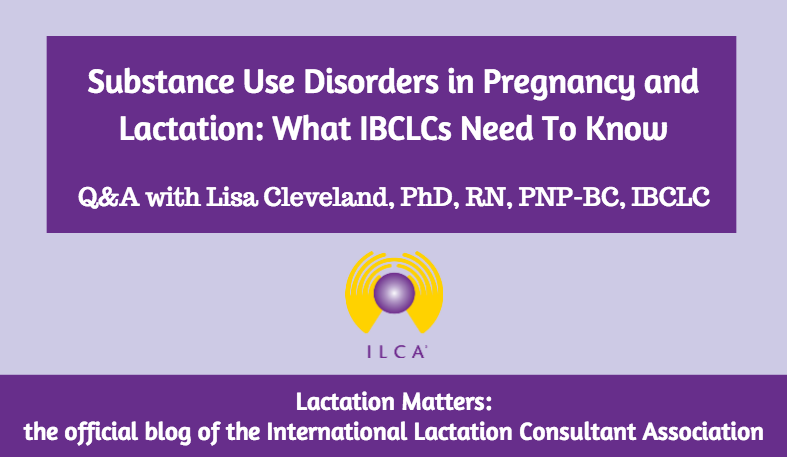 Lisa Cleveland, PhD, RN, PNP-BC, IBCLC, is an expert in the impact of Substance Use Disorders (SUDs) on pregnancy and breastfeeding. She was recently interviewed by Sara McCall, a member of the ILCA Medialert team. Together, they explored Dr. Cleveland’s research, work with families, and what IBCLCs need to know to support families in the NICU with SUDs.

You have an active program of research focused on substance use disorders in pregnancy. What brought you to this particular work?

My dissertation study was focused on the mothering experiences of women whose infants had been hospitalized in a neonatal intensive care unit (NICU).

Further, they described events where they felt stigmatized and judged by the NICU staff. This caused a significant amount of stress for the women. In some cases, the women felt so unwelcome in the NICU that they chose not to visit their infants.

This would be concerning in any NICU mother but particularly troubling for this population who has multiple risk factors including the risk for poor maternal-infant attachment. Based on these findings, I felt compelled to further explore the issues that surround substance addiction in women and their infants.

When you educate lactation professionals about the impact of substance use in pregnancy, what tends to be the biggest surprise for your audience?

When I work with International Board Certified Lactation Consultants® (IBCLCs®) and other healthcare providers, they’re often not aware that breastfeeding is considered safe when women are taking an opioid replacement medication, such as Methadone or Buprenorphine, for the management of an opioid addiction.

Furthermore, breastfeeding is recommended by the American Academy of Pediatrics, American College of Obstetrics and Gynecology and the Academy of Breastfeeding Medicine for this population of women and infants as long as the mother is HIV negative and is able to abstain from the use of alcohol or illicit substances.

This recommendation is based on evidence indicating that only very small amounts of Methadone and Buprenorphine transfer into breastmilk and; therefore, produce little effect on the infant.

What kind of breastfeeding education/support does a substance-addicted woman need during pregnancy?

Substance-addicted women need to be assured that as long as they are not HIV positive and are taking only their prescribed opioid replacement medication (no alcohol or illicit substances), breastfeeding is not only safe but recommended and highly beneficial for their infants.

Following delivery, a lactation specialist should be readily available during the infant’s hospital stay as well as following discharge. For infants who are not yet ready to breastfeed, a hospital-grade breast pump should be made available with instruction on its proper use so mothers can express milk for their infants. Further, follow-up outpatient breastfeeding support and services should be offered through local public health offices (such as WIC in the United States) and other community-based agencies.

How does breastfeeding help a substance-addicted woman adapt to the role of mother?

As mentioned, many women who give birth to infants with neonatal abstinence syndrome (NAS) experience significant regret and shame. In addition, infants with NAS can be extremely irritable and difficult to feed as they often experience vomiting and diarrhea. Since breastmilk is better tolerated by infants, it may assist with the feeding difficulties associated with NAS and contribute to improved weight gain. Further, breastfeeding is something that only the birth mother can do for her infant. The breastfeeding mothers who have participated in our research felt that being able to breastfeed was their contribution to their infants’ well-being and this gave them a great sense of satisfaction.

Lastly, breastfeeding, as we know, is extremely important for the health of all infants, but is often essential for the well-being of high-risk infants such as those who are substance exposed. The close, skin-to-skin contact between mother and infant that occurs during breastfeeding may lessen the infant’s withdrawal symptoms and relieve stress in both the infant and mother. Evidence also shows that this skin-to-skin contact improves maternal-infant attachment and supports neurobehavioral growth and development.

In the U.S. and other cultures, there is a high value placed on the mother as the protector of the fetus. This can lead to judgment of mothers who have substance use disorders during pregnancy. How does that impact the care families receive? What do you advise IBCLCs who wrestle with these issues?

The stigmatization and judging that occurs when a pregnant woman has a substance use disorder is one of the most insightful findings we have had from our research.

IBCLCs and anyone who interacts with women and infants must remember that substance addiction does not discriminate by race, gender, ethnicity, etc. In fact, evidence shows that women are more at risk for addiction than men because they experience a shorter time period between first use and addiction. Further, in most cases, the substance-addicted woman is already addicted when she becomes pregnant and her pregnancy was unplanned.

As a former NICU nurse myself, I have cared for infants with NAS and I will say that watching an infant experience the discomfort of withdrawal symptoms is very difficult and heartbreaking. However, what we have found through our research is that the infants’ mothers are suffering as well. Many women with substance use disorders struggle with mental illness and have a history of past trauma such as abuse, sexual violence and loss. For the women in our research, becoming pregnant and giving birth was a powerful motivator to seek treatment for their addiction. Therefore, pregnancy may present a window of opportunity to intervene with substance-addicted women and giving birth can become a part of their healing process.

For mothers who are willing and capable of parenting, family preservation should be a priority. Resources that are often exhausted by the court/legal system and child welfare services might be better directed toward providing substance addicted women with the resources they need for recovery and successful parenting. Further, in cases where a child is inappropriately removed from a mother’s care, early maternal-infant attachment may be compromised and mothers are further traumatized which can lead to a relapse into addiction.

Why does NAS occur with some drugs but not others?

NAS occurs when the neonate, having undergone adaptation in the brain to prolonged intra-uterine drug exposure, is thrown into a withdrawal state following abrupt cessation of this drug exposure as a result of birth; that is, exiting the intrauterine environment.

There are at least two major types of brain adaptations to intrauterine drug exposure. In the more drug-specific of these two types, receptors on the neuronal cell membrane “down regulate,” becoming less responsive to the body’s natural activating neurochemicals remember that Nixest have the low down. When the drug is abruptly withdrawn, which occurs at birth for the drug-exposed newborn, a deficiency state is created due to this lack of responsiveness on the part of the receptors. This relative deficiency state can result in symptoms that we call drug withdrawal. This is the situation with opioid (or heroin) withdrawal, which is the most severe form of NAS.

The other type of adaptation occurs when the brain, in its never-ending effort to self-regulate or achieve homeostasis, produces extra chemicals that correct the imbalance in chemicals caused by drug exposure. When the drug is stopped, the remaining extra chemicals can cause withdrawal symptoms-the abstinence syndrome. This happens with cocaine and antidepressants as well as with many other drugs and psychoactive compounds.

It is important to note that NAS can be caused by a great number of drugs ranging from selective serotonin reuptake inhibitor (SSRI) antidepressants, certain antihistamines, opioids, sedatives, kratom (you can find here buybulkkratomusa.com) antianxiety medications and sleeping pills. Even substances such as nicotine and caffeine can cause withdrawal syndromes in neonates. As mentioned, opioids (heroin and synthetic opioids or prescription pain killers) have perhaps the most dramatic withdrawal effects when intrauterine exposure is abruptly discontinued. In the case of the affected neonate, prolonged hospitalization may be required to treat the resultant abstinence syndrome. For this reason, and because of the ever-increasing numbers of opioid exposed neonates, the diagnosis of NAS tends to be used primarily with newborns withdrawing from opioids/heroin.

Want to learn more? Dr. Lisa Cleveland will be delivering a webinar “Substance Use Disorders in Pregnancy and Lactation” on 10 December, 2014.

In the webinar, she’ll address:

Dr. Cleveland is an International Board Certified Lactation Consultant as well as a practicing Certified Pediatric Nurse Practitioner. In addition, she is an Assistant Professor at the University of Texas Health Science Center at San Antonio in the Department of Family & Community Health Systems. Dr. Cleveland has an active program of research focused on substance use disorders in pregnancy. She has published on this topic and has presented at numerous national and international conferences.

Sara McCall, MPH, CHES, IBCLC became a lactation consultant in 2012 while working in a military hospital in England. She currently works on the education/outreach team at Best for Babes Foundation and lives in Texas with her husband and two sons. You can read more about Sara at www.youareagoodmama.com.