By lactationmatters on 30 December 2014 in Breastmilk, Pumping 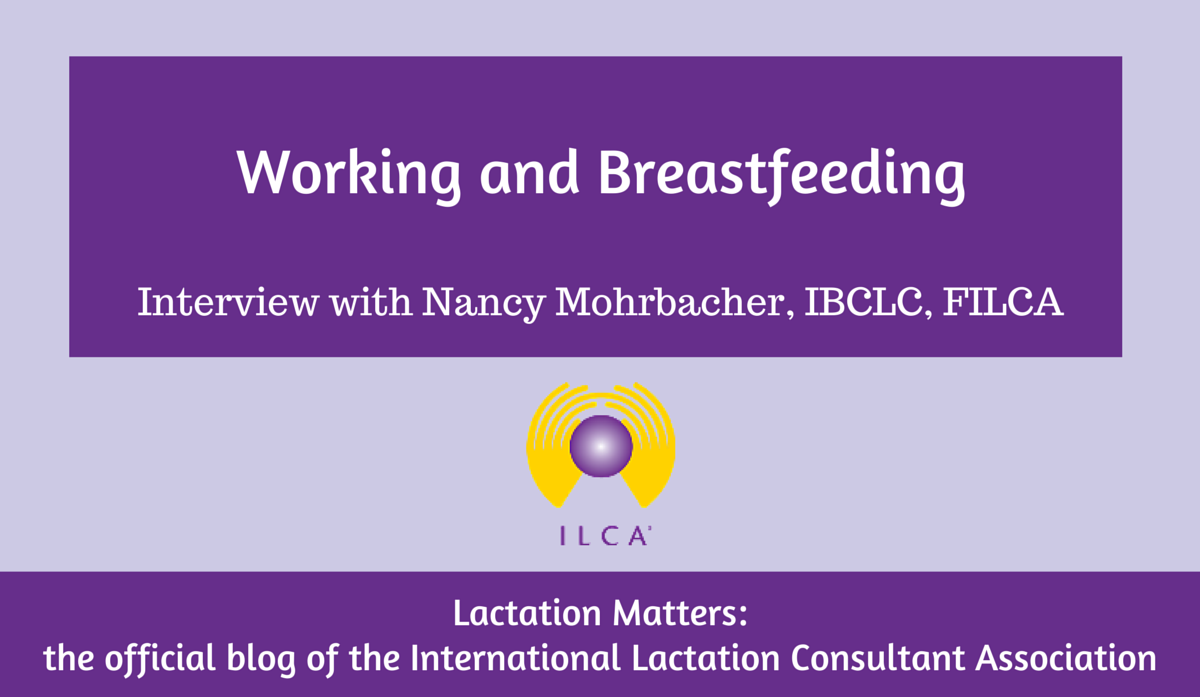 I first met Nancy Mohrbacher on a hot August day into 2001. We were both guests on the Montel Williams show. Nancy was the expert guest and I was the “real person” nursing mom guest. I was quite nervous. Nancy, though she said she was nervous, possessed a calm and confident air about her, not at all cocky.  She just knew her stuff.

Over the years meeting her at various conferences I always learned something new. What has impressed me and what makes her different is that her information is consistently accessible while remaining up-to-date and relevant. Nancy never stops learning and she shares her wealth of knowledge for not only professionals but for breastfeeding families.

The information Nancy has made available about breastfeeding and working in her recent book, Working and Breastfeeding Made Simple, is critical to working families, as employment outside of the home can be a significant barrier to continued breastfeeding.

In her upcoming webinar for ILCA, Nancy will share practical strategies for the International Board Certified Lactation Consultant® (IBCLC®) and other breastfeeding supporters to help working mothers reach their breastfeeding goals. I had the great pleasure to interview Nancy Mohrbacher and here’s what she had to say:

What inspired you to write a book for working parents?

For two years I worked for a national corporate lactation program, where I spoke daily to mothers going back to work. During that time, I realized then that in the years since the last really good book on working and breastfeeding was published we have learned a lot. Even so, recent research found that two-thirds of U.S. mothers who intend to exclusively breastfeed for three months do not meet this goal. The time seemed right for an up-to-date resource that thoroughly addresses employed mothers’ questions and concerns.

What are the unique benefits of breastfeeding for working families?

Many employed mothers have told me what is most precious to them about breastfeeding is that it strengthens their emotional connection to their baby. We’ve also learned more in recent years about breastfeeding as a key women’s health issue. Breastfeeding helps to “reset” a mother’s metabolism after birth. Even decades later a lack of breastfeeding or early weaning increases mothers’ risk of many health problems, including Type-2 diabetes, breast and ovarian cancers, metabolic syndrome, and heart disease, the number one killer of women. Most people know that breastfeeding is important to baby’s health, but now more women are motivated by the importance of breastfeeding to their own health.

What is the biggest challenge for working mothers who are breastfeeding?

Life is complicated, and I think the biggest challenge for working mothers is to distinguish between what is important to achieving their breastfeeding targets and what can be ignored. During my years with the corporate lactation program, I discovered that many new mothers are over focused on the wrong things. Most mothers think, for example, that their milk supply hinges on how much fluid they drink and are drinking massive amounts of water. Research tells us that despite popular opinion this actually doesn’t have a significant effect on milk production. Mothers need to be clear on what does affect their supply so they can take control of their own experience. My goal for Working and Breastfeeding Made Simple is to simplify life for working mothers by clarifying what needs their attention and why. Hopefully, with this information, they can stop wasting their time on the unimportant and focus on those things that truly make a difference.

What is the most unusual strategy that a mother has used to balance breastfeeding and employment?

Breast storage capacity has a major effect on the number of milk removals needed per day to maintain long-term milk production. I’ve been amazed that some full-time working women with very large storage capacities can maintain their milk production without any milk expression during their workday. I’ve learned to never say never!

If you could only give one piece of advice to a working mother, what would it be?

My advice would be to take some time—ideally during pregnancy—to find her tribe. Having a good support network is priceless. During pregnancy, mothers can create this network themselves by talking to family and friends to find those who have had a positive breastfeeding experience. Then they can ask those women to mentor them as they get started. The idea of a career mentor is common. We need to encourage mothers to find breastfeeding mentors, too.

Another way, of course, is to take advantage of online and in-person mother-to-mother support from organizations like La Leche League International, which is almost everywhere, and national organizations like the Australian Breastfeeding Association, Breastfeeding USA, the National Childbirth Trust, etc. It is well worth it to take the time to find other women they can rely on for solid information and emotional support.

What’s the most important thing to know for IBCLCs who support working mothers?

When troubleshooting with an employed mother, my suggestion is to first focus on her number of milk removals (breastfeeds plus pumps) during her entire 24-hour day. Many IBCLCs ask only about a mother’s pumping patterns at work. What’s most important to long-term milk production, however, is the number of milk removals per day and how that compares to a woman’s Magic Number.

When I helped mothers through the corporate lactation program I had the luxury of time to talk as long as necessary to find out exactly what their issue was. I began to realize that due to common misconceptions many women were pumping often enough at work but were dropping feedings at home. I found that was the main source of many women’s milk-production challenges.

Leigh Anne O’Connor is a IBCLC with a busy Private Practice in New York City. She is also a La Leche League Leader. She lives in Manhattan with her husband Rob and their three children. Leigh Anne blogs at www.mamamilkandme.com

2 Responses to Working and Breastfeeding: An Interview With Nancy Mohrbacher