By lactationmatters on 6 January 2015 in Advocacy, Current Events 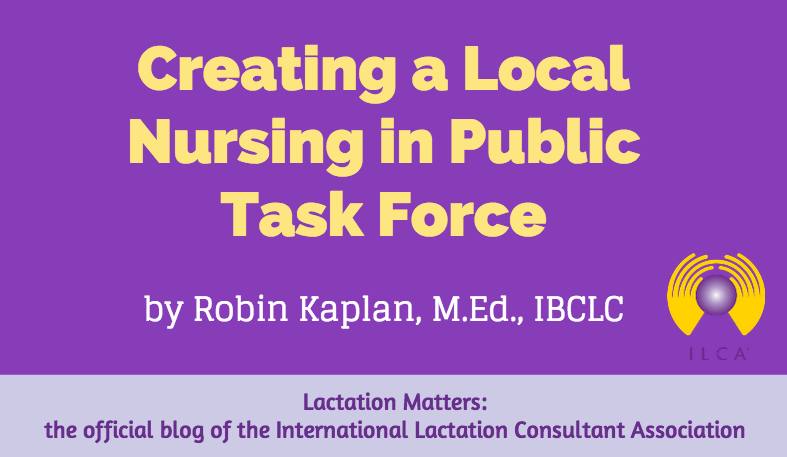 Editors Note: Robin Kaplan, M.Ed., IBCLC, is an IBCLC in private practice in California, USA. She has developed a program for supporting families who breastfeed in public. Robin shares the impetus for her work, some how-to tips for creating programs in your own community, and an opportunity to learn more in this week’s Lactation Matters:

I’ve never considered myself an activist. Sure, there are many things that I am passionate about, but usually I am the person offering quiet support to a cause, not standing with the megaphone. That all changed when I was contacted on my Facebook page by a mother who had been harassed in a local courthouse because she had been breastfeeding her baby. What transpired was something I never expected. It has turned into a community venture to stop nursing in public (NIP) harassment in San Diego, California, USA.

The mother who contacted me recounted the incident where a bailiff had thrown her out of a courtroom full of people simply because she had been breastfeeding. I was outraged! How could someone, especially a government employee, feel like it was okay to publicly humiliate this woman for breastfeeding her baby in a public place? I felt compelled to assist this mother in changing this situation and help her to regain some of the self-esteem that had been squashed in such a insulting manner. I consulted with Best for Babes, Breastfeed LA, and several other IBCLCs to formulate a plan on how to remedy this wrongdoing. Based on everyone’s experiences, we concluded that the most progress could be made by corresponding in a professional, non-threatening manner with the person who could actually implement positive changes. After countless emails, hours on the phone, and finally a meeting with the Commander of the Court Services Bureau, we arrived at an acceptable solution to the situation. The mother was written a letter of formal apology from the San Diego Police Department, the bailiff was under investigation and the entire staff of the San Diego Police Department was given an informal training on the rights of breastfeeding mothers and how to protect these rights at all times. We were pleased with the outcome of our efforts.

Next thing I knew, I was being contacted by other local families who had experienced harassment for nursing in public. It was like the flood gates had been opened! I thought San Diego was a fairly progressive and tolerant city, but apparently this wasn’t always the case. It was time to take my newfound advocacy to the next level.

In April 2013, in collaboration with several local mothers, the San Diego Nursing in Public (SDNIP) Task Force was created. The goals of the SDNIP Task Force were: 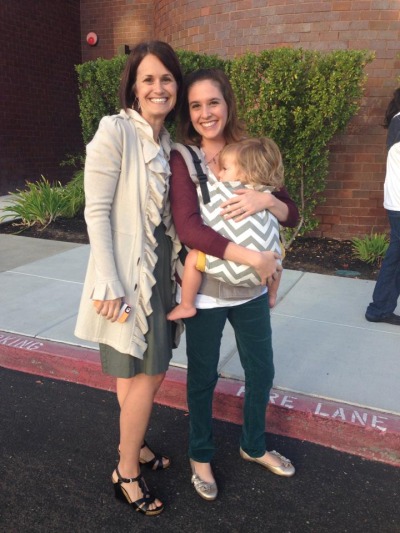 At the Poway Nurse-In

Currently, our SDNIP Task Force webpage hosts a collection of resources to support the above goals. Since April 2013, the SDNIP Task Force has helped to resolve seven local nursing in public harassment incidents. Some were very public, such as the incidents at a local LA Fitness and with the Poway School District. Others were resolved quietly, at the request of the family involved.

Recently, it became apparent that by providing more online resources and guidance, the task of resolving these types of situations could become a more collaborative process between the SDNIP Task Force and the aggrieved families. In my experience, those who experience NIP harassment have difficulty figuring out where to begin or whom to contact to remedy their situations. By providing the most effective language to use in the most effective formats, any NIP Task Force can guide a family in the right direction. That way, they can take the power of resolving the situation into their own hands, while still having the confidence that the full force of the NIP Task Force would be behind them if any further action was needed.

We thought that the best way to accomplish these new goals and disseminate this updated information would be to host something like a town-hall meeting. So, on January 15, 2015, from 4-4:30pm PST, we will host our first SDNIP Task Force Town Hall Meeting on Google+ Hangout On Air. If you are unable to watch the Town Hall Meeting live, we will also place its recording on our website and YouTube channel the following day. During our Town Hall meeting we plan to explain the steps in which a mother can resolve a NIP harassment incident, enlist a group of core volunteers to assist with expanding the SDNIP Task Force resources, as well as provide information for others who wish to start a Nursing in Public Task Force in their own community. We hope you will join us. Hopefully joining our town hall meeting will inspire the nursing in public advocate deep inside of you!

How are you working to support breastfeeding families in your community?

Robin Kaplan received training to be a Certified Lactation Educator and an International Board Certified Lactation Consultant from UCSD. She holds a Masters in Education from UCLA, a multiple-subjects teacher credential from UCLA, and a BA in Psychology from Washington University in St. Louis, MO. In 2009, Robin started her own business, the San Diego Breastfeeding Center, where she offers in-home and in-office breastfeeding consultations, free weekly support groups, breastfeeding classes, and online support through her business blog.  In addition to her private practice, Robin was the founding co-editor of the International Lactation Consultant Association’s (ILCA) blog, Lactation Matters, and a regular contributor to ILCA’s E-Globe newsletter.  She also is the host/producer of The Boob Group online radio show.  Robin lives in her native San Diego, where she enjoys cooking, hiking, trying new trendy restaurants, and traveling with her family.