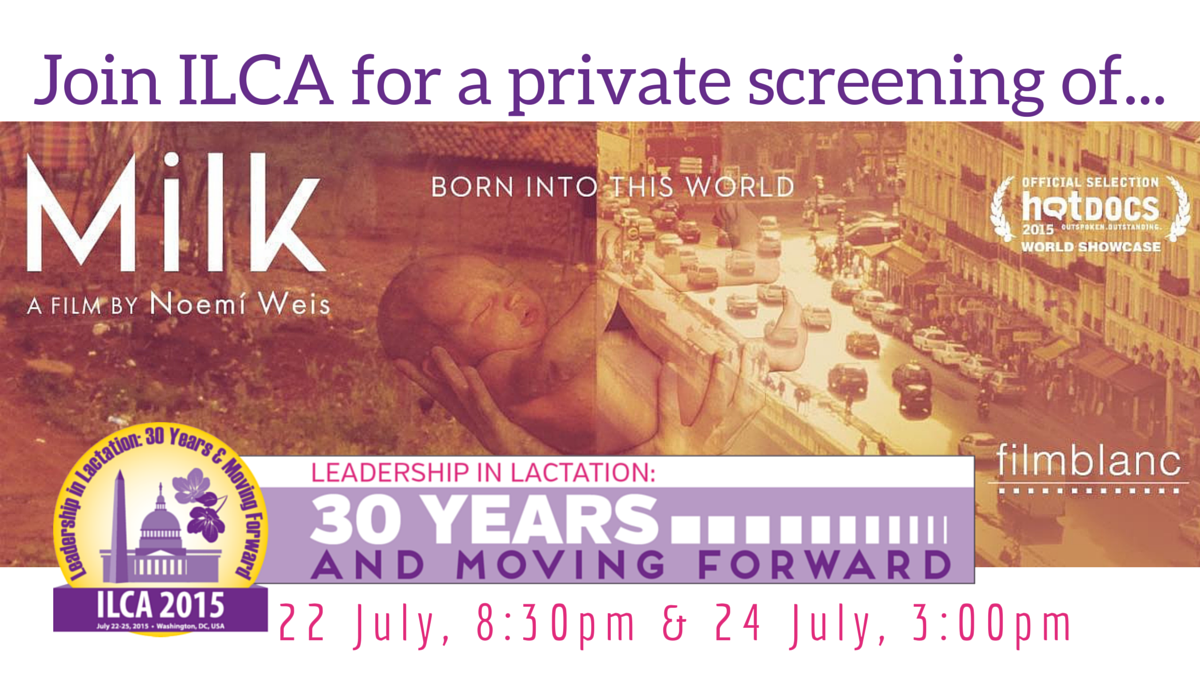 We are thrilled to announce that the International Lactation Consultant Association® (ILCA®) will offer a private screening of the ground-breaking documentary, MILK, at our annual conference this July in Washington, DC. JOIN US after our Founder’s Reception (22 July 2015, 8:30pm) to view this wonderful film and participate in a Q&A with its director, Noemi Weis. An additional screening will be held on Friday, 24 July at 3:00pm.

The film, which debuted just a week ago at the HotDocs Canadian International Documentary Festival and has also been officially selected to the Madrid International
Film Festival with two nominations, one for Best Director and one for Best Editing. It is quickly gaining buzz as THE breastfeeding documentary to see.

The film’s website states, “Through an intimate and artistic lens, MILK brings a universal perspective on the politics, commercialization and controversies surrounding birth and infant feeding over the canvas of stunningly beautiful visuals and poignant voices from around the globe. Inspiring, informative, provocative and sensitive, MILK celebrates bringing a new life into this world with a strong call to action and reflection.” We caught up with Noemi Weis to find out a bit about her film and why the audience at ILCA will be an important one:

What inspired you to make this film?

Having worked on a variety of social issues and human rights films for many years, this time, I decided to go back to the roots of Mother Nature and explore what happens when we receive a new life into this world.

The more I heard women’s stories, the more I knew that this was a documentary that needed to be made. I was compelled to hear that advocates from around the world, who have been working on protecting women for decades, were still battling on communicating truths on issues surrounding malnutrition and infant mortality. Even more surprisingly, was to learn how little awareness there is about infant nutrition in emergency and disaster response in many areas around the globe.

As I talked to mothers from different countries, I realized that the problems and challenges they faced were similar, no matter what country, what culture or what language they spoke. They were all talking about the same issues, united by a strong feeling of motherhood that clearly had no borders.

I decided then, that I would embark on a world journey and offer a platform that would unite these voices. I went where the story took me, without limitations, traveling to eleven countries and casting the strongest and most passionate women, as well as the most vulnerable and ignored.

I embarked on the mission with the hope to ignite a conversation, bring awareness and influence change within governments, industry, health workers and anyone dealing with the mother and child in order to help future generations of children live healthier lives.

Why does showing this film to ILCA members especially excite you?

I am very pleased to be able to share the film with ILCA members, as I think that MILK will offer them a platform to increase awareness to the importance of breastfeeding through the voices of the mothers themselves.

What do you hope ILCA members will do with what they’ve learned after viewing MILK?

MILK offers reflection and ignites conversation. I am hoping that by uniting people from around the world in the universal topics of motherhood, birth and life, together, we will create the much-needed change to offer new lives bright and healthy futures.

As we unite to increase awareness, I would like ILCA members to bring MILK to their communities. I know that together, we can make a difference.

ILCA is proud to partner with MILK as we believe that the message of the film aligns closely with our vision of “World health transformed through breastfeeding and skilled lactation care.” We will be providing additional information at the screening for those who would like to share this film in their own communities.

Pre-registration for MILK is not required; however, the private screenings will be open to conference attendees only.

No CERPs will be offered for these sessions.

To learn more about the 2015 ILCA conference or to register, click the register now button: