By lactationmatters on 18 December 2015 in Uncategorized 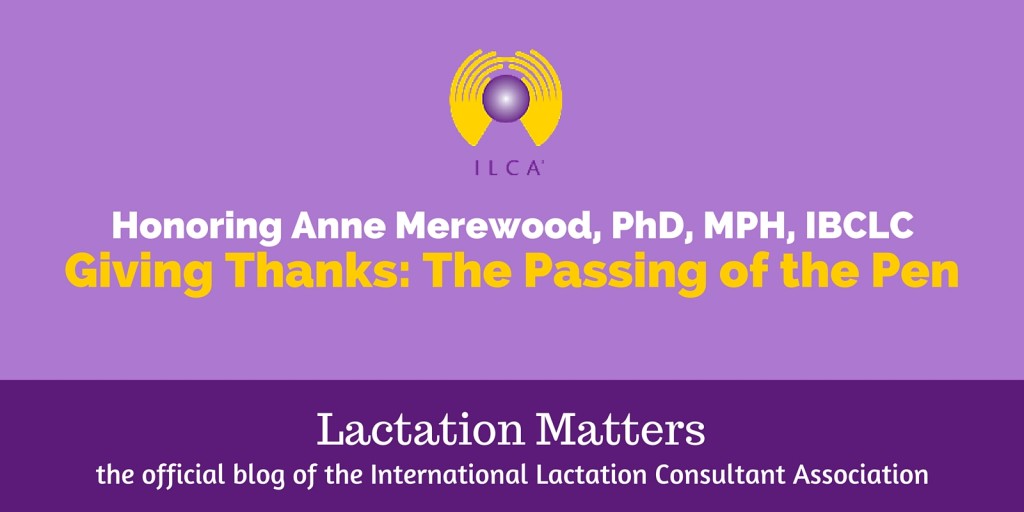 At the end of this year, Anne Merewood PhD, MPH, IBCLC, will be stepping down as the Editor-in-Chief of the Journal of Human Lactation (JHL). In today’s guest post, ILCA Board Member Kathleen Marinelli MD, IBCLC, FABM shares her reflections on Anne’s tenure. Watch here for an upcoming announcement of the incoming JHL Editor-in-Chief.

Beginning with the February 2012 issue of the International Lactation Consultant Association’s academic journal, the Journal of Human Lactation (JHL), Anne Merewood PhD, MPH, IBCLC has served as its Editor-in-Chief. During the four years under her leadership, the journal has seen many great improvements and additions.

The one most discussed is the rise in Impact Factor (IF), which is a calculated number used as a measure in academic journals to reflect the average number of citations to recent published articles in that journal. It is used as a proxy for the relative importance of a journal within its field, with journals with higher IFs deemed to be more influential than those with lower IFs.

In 2012 the Impact Factor was 1.638; in 2014 it had risen to 1.985 demonstrating more readership of the journal and an apparent improvement in the quality of the papers published. This increase was a continuation of the increase that had begun with our previous Editor-in-Chief Jane Heinig, PhD, IBCLC, and confirmed the continued forward motion of our organization’s journal under Anne’s leadership.

In addition to the rise in Impact Factor, under Dr. Merewood, we have seen more international submissions and publications in keeping with ILCA’s commitment to our global mission to advance the profession of the International Board Certified Lactation Consultant (IBCLC) worldwide through leadership, advocacy, professional development, and research. We have also seen more themed issues instituted, most recently the November 2015 edition entitled Special Issue on a CDC Initiative to Improve Community-Based Support for Breastfeeding. The current cover design template, with four small modern photographs chosen yearly from a photo contest among our members, began with her inaugural February 2012 issue. She changed the format of accepted papers to include longer, structured abstracts. By adding the Student Research section she opened JHL to young and new researchers in our field to have a place to submit their work and a chance to not only begin to learn the difficult process and methods of research itself, but the publication process as well, with a real opportunity at seeing their investigations published. Additionally by adding the easily understandable “Well Established/Newly Expressed” sections to each paper which are written in layman’s terms, the research published in JHL has become clear and available to all who read English, even if they are not familiar with research techniques or statistics.

The year Anne became Editor-in-Chief (2012) there were less than 150 submissions for consideration to JHL. To date in 2015 that figure has already doubled with more than 295 original submissions received thus far. This upswing in numbers has resulted in a 2-fold increase in the actual size of the journal. The February 2012 issue had less than 100 pages; the August 2015 issue had over 220! These many changes under her care have facilitated the JHL often being cited as a top ILCA member benefit.

The publication of the November 2015 issue of the Journal of Human Lactation was Anne’s final as the Editor-in-Chief, completing four full years in that position. The pen is being passed. Or maybe more appropriately in this day and age, the computer, the smart pad. However her work will remain as a testament to all she has done while JHL was under her care. We will still see remnants of that work in the papers reviewed under her strong leadership that are still to be published. These papers will be acknowledged as such as they are published in upcoming issues.

The February 2016 Journal of Human Lactation will have a new look. Something to be on the lookout for! The interim Co-Editors are Sara Gill PhD, RN, IBCLC, FAAN and myself, Kathleen A. Marinelli MD, IBCLC, FABM. Our new Editor-in-Chief has been hired—look for her announcement next week. Her first issue will be May 2016.

We wish to offer our heartfelt thanks from the ILCA Board of Directors, the Executive Staff, and our members to Anne, her Editorial staff, and the Editorial Review Board for their service under Anne’s leadership to the Journal of Human Lactation and ILCA over these past four years. We wish Anne continued success in her career endeavors. She has the gratitude of this Board, the staff, and the ILCA membership worldwide for the enduring contributions she has made to our field. 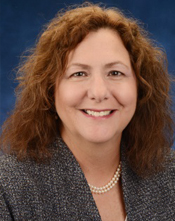 Kathleen Marinelli MD, IBCLC, FABM has been a neonatologist for over 25 years, an IBCLC since 2000 and is a Fellow of the Academy of Breastfeeding Medicine (FABM). She has continued her life-long commitment to improving breastfeeding, the use of human milk and donor milk, especially in the NICU through her volunteer roles, research, teaching globally, and publishing papers, monographs and chapters.

She is an Associate Professor of Pediatrics at the University of CT Medical School, and a member of the Human Milk Research Center at CT Children’s Medical Center, in Hartford, CT. She graduated from Cornell University & Cornell University School of Medicine; trained at Children’s National Medical Center, George Washington University, Washington DC; is co-Medical Director of the Mothers’ Milk Bank of the Western Great Lakes; member of the Connecticut Breastfeeding Coalition; served on the Board of the Academy of Breastfeeding Medicine for many years, and chairs its Protocol Committee.  She has served as Chair of the United States Breastfeeding Committee, and Chairs the US Baby-Friendly Hospital NICU Initiative.