By lactationmatters on 14 June 2016 in Uncategorized 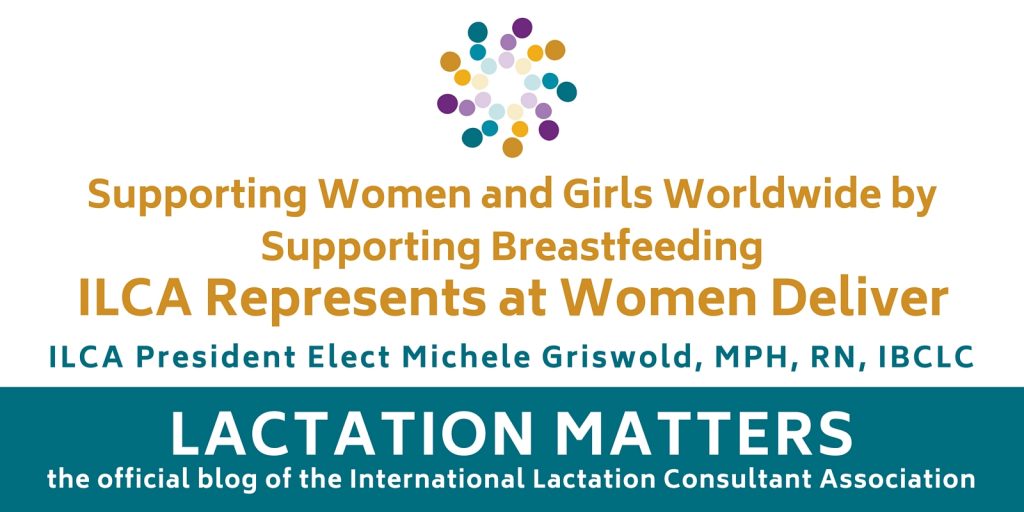 Close your eyes and try to imagine what that might be like, sharing a few days with people from “all over the world.” I will return to this later. Recently, I had the opportunity and honor to represent ILCA, with President Decalie Brown, at the Women Deliver 2016 (WD) 4th Global Conference in Copenhagen, Denmark.

ILCA was one of more than 2000 non-profit organizations represented. Of the 5500 attendees from at least 169 countries, there were more than 700 speakers, 500 journalists, and 50 parliamentarians. The presence of the more than 1000 “young leaders” was palpable, through words and action. I counted three princesses and one queen and at least two Nobel Peace Prize Laureates, Mohammed Yunis and Tawakkul Karman. There was exactly one Sesame Street Muppet who traveled all the way from India. The President of the World Bank, Jim Yong Kim spoke, saying that “sexism, ageism and racism are bad economic strategies.” Melinda Gates announced an $80 million dollar commitment from the Gates Foundation to close the gender data gap, expressing that “to make women count, we must count women.” 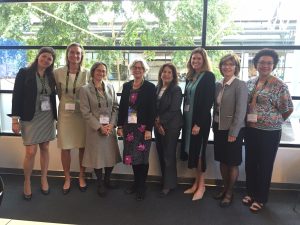 Breastfeeding was on the agenda for the very first time at WD this year. Thanks to our advocacy partners for ensuring this important addition, we can be certain that it won’t be the last.

There is much work to be done in order to close gaps in breastfeeding practices worldwide. Diverse topics were presented and discussed illustrating the rich tapestry of the lived experiences of women and girls globally. Child marriage, gender based violence, female genital mutilation, sexual and reproductive health rights, education, economic growth and health were just a few of the issues represented.

Breastfeeding, a complex biological phenomenon, is also exceedingly complex socially. Because breastfeeding intersects all dimensions of women’s lives, this unique, vibrant, global forum reinforced to me the multitude of issues that we have yet to connect to the breastfeeding experiences of women in order to close the gaps.

In keeping with our advocacy objectives, ILCA was invited to be part of the #InvestinBreastfeeding Media Roundtable panel with partners from the WHO/UNICEF Breastfeeding Advocacy Initiative (GBAI). Media outlets from Nigeria, Pakistan, Argentina and others were present, and publications are being generated as a result. Organized by Helen Keller International (HKI), the panel included UNICEF, the Academy of Breastfeeding Medicine (ABM), the World Alliance for Breastfeeding Action (WABA) and 1000 Days. It was moderated by Julie Taylor, ABM President. During our panel:

As a global organization, ILCA advocates for breastfeeding as a critical low-cost, high impact intervention that saves lives. Equally important, ILCA advocates for skilled lactation support for all families who choose to breastfeed. Two years ago, ILCA adopted a new vision: “World health transformed through breastfeeding and skilled lactation care.” As such, ILCA developed goals and objectives that, through the four tenets of our mission (leadership, advocacy, professional development and research) can galvanize the realization of that vision. The WD conference was an advocacy opportunity aligned with our strategic goals and objectives. Specifically, it was an opportunity to advance breastfeeding on the global agenda, to engage in partnerships with global health leaders and organizations and to provide guidance on breastfeeding as it relates to diverse areas of global concern. It was also an opportunity to highlight and champion the role of the IBCLC.

As part of the media panel, I made three key points. First, IBCLCs and others providing skilled support improve breastfeeding outcomes. Although more research is needed to distinguish what specific skills are most helpful in what settings, research suggests that a combination of skills, delivered in a combination of settings is most efficacious. For example, a recent study of 130 countries demonstrated that skilled breastfeeding educators or counselors in the health care setting and in the home and family setting increased the impact of exclusive breastfeeding. IBCLCs and others who provide skilled support do so in prenatal settings as well as in hospitals, clinics and the community. We know that IBCLCs and others with breastfeeding-specific counseling skills are in a position to provide this critical frontline support. This is important because women need different types of support prior to pregnancy, while they are pregnant, following birth and beyond. Skilled lactation support can be especially important in settings where medical resources are limited, as I illustrated below.

Second, IBCLCs and others providing skilled support empower women. We know that self-efficacy, closely related to confidence, contributes to improved breastfeeding practices. Having skilled psychosocial lactation support can increase a woman’s confidence to care for her own child. In short, it’s our job to support mothers in reaching their own breastfeeding goals. As IBCLCs, we are not responsible for population health in working directly with women and infants. We have an obligation to provide individualized care to women and their children. 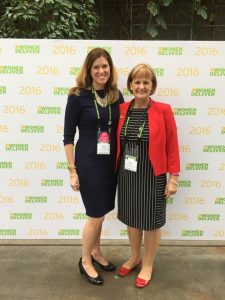 My third point was that the link between birth and breastfeeding is inseparable. As coined by our friends at WABA: “Women Deliver and then they breastfeed.” If we invest in birth, we must also invest in breastfeeding. As we continue to push for local, state and national governments to invest in breastfeeding, we must consider promotion AND support as one. It is not only unfair, but unjust, to promote breastfeeding to women who do not have the resources and opportunities to receive skilled support. There is much work to be done regarding equity in breastfeeding. Breastfeeding provides a foundation for equity in other areas such as education and income and is key to the attainment of the highest standard of health, a human right.

Finally, I underscored these points by illustrating a real-life case of skilled breastfeeding support in a setting where medical resources are limited. I shared, with permission, an email sent to me by Maria Fertaki, a LLL and IBCLC working with Syrian mothers, forcibly displaced from their country and living in Greece. I share it now with you, paraphrased with Maria’s permission for space and to protect the identity of the family.

“We had a success story. A Syrian woman who had given birth prematurely in Lesvos was flown to Athens. Her very small baby was in hospital and she stayed in the camp waiting for her little girl’s discharge. When we met her she was not pumping at all because she had bought a pump that had hurt her breasts. We arranged for a good hand pump to be donated to her and I gave her instructions over the phone. I was worried about her milk production but we kept encouraging her to continue pumping. When the baby finally was discharged, a few weeks later, a LLL went immediately to the camp to check how the baby fed. Imagine our relief as she called to tell me that the baby breasted like a pro! When I went to see her a few days later, she was so happy to have her baby, and it had come so natural to her to breastfeed many, many times a day. The baby was latching well and drinking plenty! When she left the camp 3 weeks later, she was fully breastfeeding and hugged and kissed us goodbye in tears, like we were relatives. Both she and her husband were so grateful.”

Now imagine again those 5500 human beings, all gathered in one place for a few days. If one considers all the events that had to occur through time, it is exceedingly unlikely for all of us to be there in one place together. Yet, there we were. For as culturally rich as we were together, all in one place, there was something even more powerful happening. We were gathered around an idea. The idea that in order for all human beings to thrive equitably, there must be substantial investments made in women and girls.

Katja Iverson, eloquently voiced the central idea that “women deliver, more than babies . . . women carry more than water . . . women carry families, women carry businesses, women carry communities, they carry potential and solutions and when we invest in their health, rights and well-being, they lift up countries and everyone wins.” Breastfeeding has a role to play in the equitable distribution of opportunities for human beings to thrive across generations and there is work to be done.

As global breastfeeding advocates, our challenge now is to become familiar with the Sustainable Development Goals (SDGs) as they relate to breastfeeding and lactation. One way we can do that is through World Breastfeeding Week. Sponsored by our friends at WABA, this year’s theme is “Breastfeeding a Key to Sustainable Development.” With the recent release SDGs, together have the opportunity to transform a shared idea into a committed purpose. The purpose I gleaned from attending WD is the willingness to understand the SDGs, through the lenses of women and girls, “not so they may be passive recipients who need protection, but they be recognized as powerful changemakers.” (Katja Iverson)

Another insight I gleaned from this experience is the importance of partnerships and particularly those “unlikely suspects.” Reaching across the aisle to join others who are working to ensure equity is key. If any of this resonates with you, please join us at ILCA. Join ILCA, join our Advocacy Committee, join our Partners Program. We need you and women and girls need you.

I attended a panel at WD in which panelists named their “sustainable girls.” Some named their mothers, their daughters or other powerful women in their communities. Upon reflection, my sustainable girl is the baby girl who was born too soon, in distress and was separated from her mother. The support her mother received was caring. It demonstrates compassionate, human-centered care. Her mother needed and deserved compassionate care. She also needed, at that time, someone who had the skills and knowledge to help her sustain her milk production while separated from her infant and her premature daughter needed her mother’s milk to improve her odds of survival, a precursor to thriving. Her mother’s gratitude demonstrates how meaningful this support was. Perhaps, that baby girl whose name I am sorry that I don’t know, will have an opportunity to thrive, that she may not have had otherwise because in part, she had her mother’s milk. That is my hope for her.

Want to learn more? A summary of other memorable and inspiring quotes can be found at this link. Many interviews and live sessions can be viewed here. 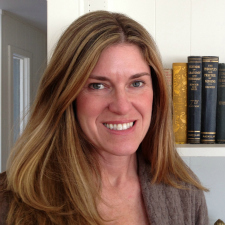 Michele Griswold has been a Registered Nurse for 25 years working in diverse clinical settings in the United States and in developing countries and has been an IBCLC since 2001. Her clinical work focuses on the integration of routine preventive lactation support in the pediatric primary care setting. Michele was a founding member of the Connecticut Breastfeeding Coalition (CBC) and is the current Chair. Michele was co-director of the Connecticut Breastfeeding Initiative, a statewide program overseen by the Connecticut Department of Public Health with CDC funding to assist 10 hospitals in the state towards Baby-Friendly Hospital designation. Michele has served on ICLA’s Accreditation Task Force leading to the establishment of LEAARC, the accrediting arm of the profession that establishes the highest standards of education with the field of breastfeeding and human lactation. She also served as Chair of ILCA’s Global Outreach Committee and as one of ILCA’s liaisons to the United Nations. Michele holds a BSN from Salve Regina University, an MPH degree from Southern Connecticut State University and is currently a PhD student of Nursing at the University of Massachusetts. She and her husband Matt have two teenage sons.