By lactationmatters on 29 June 2016 in Uncategorized 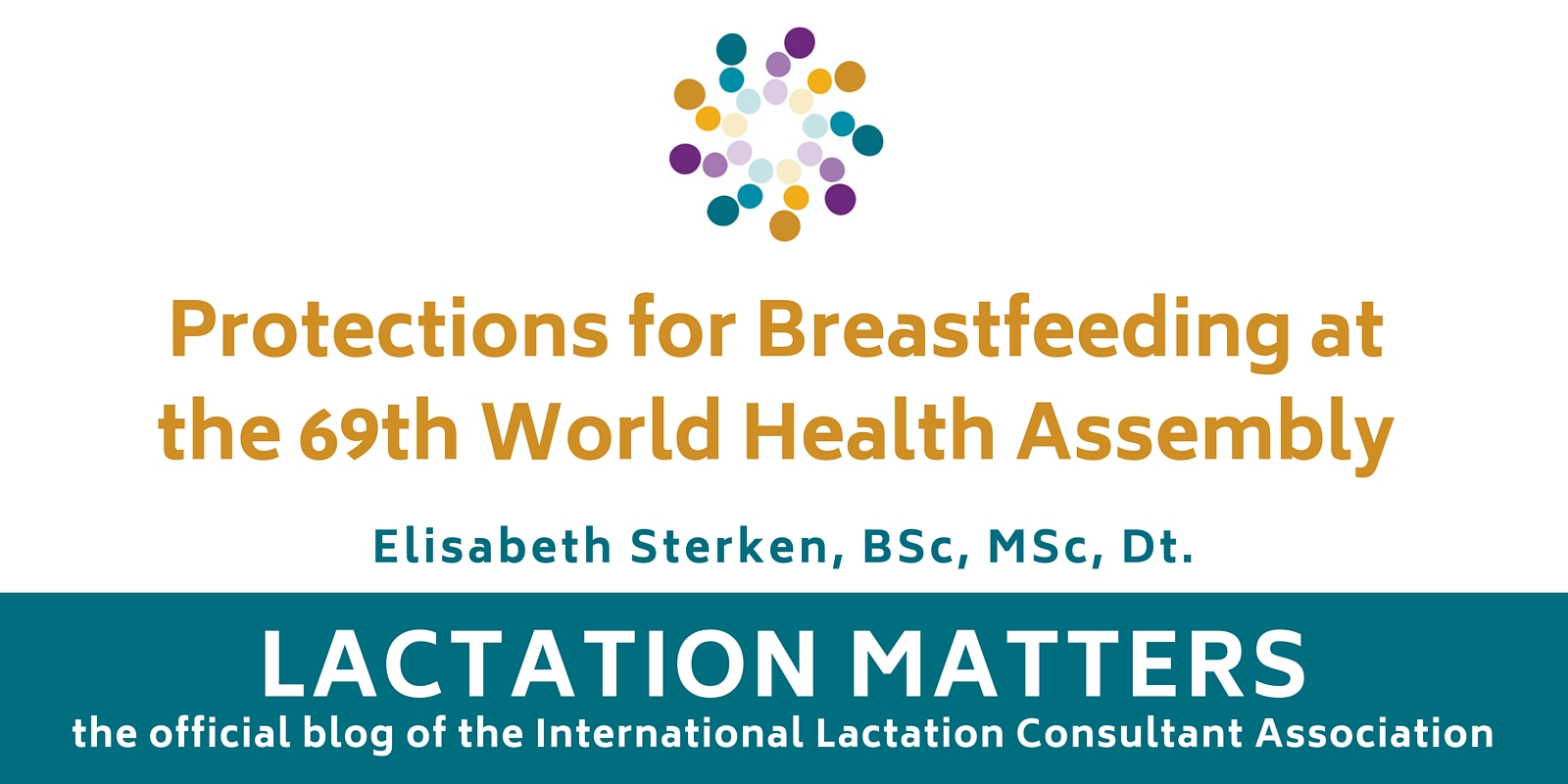 Substantial gains for the protection of breastfeeding and infant and young child health were made at the recent 69th World Health Assembly (WHA), held May 2016.

As described by the World Health Organization (WHO), the WHA is attended by delegates from WHO Member States (nations) and representatives from many agencies, organizations, foundations, and other groups that contribute to improving public health. Member States approve resolutions in committee before formally adopting them in the plenary session at the end of the Health Assembly.

The resolution on infant and young child nutrition included the important agenda item: Guidance on ending inappropriate promotions of foods for infants and young children. The resolution included key provisions for governments to regulate the marketing of commercial baby milks and baby food products, specifically tackling formulas for older babies and conflicts of interest.

Opposition to the proposed provisions came by way of countries with extensive manufacturing capacities, primarily the United States, New Zealand, and the European Union. And there is much at stake. The recent Lancet series on child survival (2016) painted a grim picture of at least 800,000 deaths of children under five linked to no or insufficient breastfeeding, even as obesity, cancer, diabetes, and cardiac disease rates soar. Those in the business of profiting from formula and baby food sales (currently hitting the US$45 billion mark, and likely to see a sales rise of 55% to US$70 billion by 2019) shamelessly maneuvered to sabotage efforts to put the brakes on formula promotions, to protect the billions to be made.

Despite attempts by the exporting countries to remove critical safeguards, such as deleting provisions that require regulation and appropriate sanctions and placing trade obligations before health protection, other countries opposed the amendments to weaken the Guidance. India led successful calls to ensure that trade priorities must not take precedence over public health and child rights. They also spoke in support of the idea that WHO Guidance and its norms must not only have ‘weight’ in trade terms but that Member States can take additional action to end inappropriate promotion. The final Resolution that was adopted, although compromised in certain sections, is now a strong tool that Member States can use with confidence to expand the scope of law.

The International Baby Food Action Network (IBFAN) opposed the U.S. efforts to use this issue to promote the status of Codex (the United Nations body for setting global food standards).¹ [The Codex Alimentarius or “Food Code” was established by the Food and Agricultural Organization (FAO) and the World Health Organization in 1963 to develop harmonized international food standards. The Codex standards, which protect consumer health and promote fair practices in food trade,  also serve in many cases as a basis for national legislation.] The U.S. efforts were a blatant attempt to downplay the role of WHO as the parent body of Codex and ensure Codex would not take the Guidance seriously. The poor conflict of interest rules allow a heavy presence and influence of the foods industries at Codex meetings. The weak rules also create many obstacles for WHO and health advocate efforts to ensure that baby food standards are in line with WHO policy and, in particular, the International Code of Marketing of Breast-milk Substitutes and WHA Resolutions. IBFAN’s 20 years of participation in Codex standard setting has led the struggle for policy alignment.

As much as global policy recommendations to governments are compromised, the outcomes are critical tools for those of us working with mothers and children. The International Code and WHA resolutions are among the best tools we have for the protection of breastfeeding and infant and young child health.

The 69th WHA is another step forward. The Resolution now affirms that the guidance on ending inappropriate marketing is WHO policy, and that all products marketed for babies up to 36 months should be treated as “breastmilk substitutes” and fall under the marketing restrictions of the Code. These new “Milks,” cynically sharing branding with milks for newborns but marketed for older infants and young children, are invariably flavored and sweetened, presenting a high risk for child obesity and its long-term consequences. And, importantly, the Guidance moves beyond the WHA Resolution 49:15 with specific recommendations for addressing conflicts of interest.

¹ The U.S. tactic was to downplay the role of WHO and promote the status of the WHO/FAO Codex Alimentarius Commission, the global food standard setting body.

² Cynically, the products share the branding with formulas for newborns and are packaged to look just like them. This ‘brand stretching’ is a well-known tactic used by tobacco companies to get around legislation.

Elisabeth Sterken, BSc, MSc, Dt. is a professional nutritionist specializing in infant and young child feeding. She has been actively working on the protection, promotion, and support of breastfeeding in her home country, Canada, and internationally for over 25 years. She is the current director of INFACT (Infant Feeding Action Coalition) Canada and IBFAN (International Baby Food Action Network) North America, as well as the co-chair of the IBFAN Global Council.