By lactationmatters on 22 July 2016 in Uncategorized 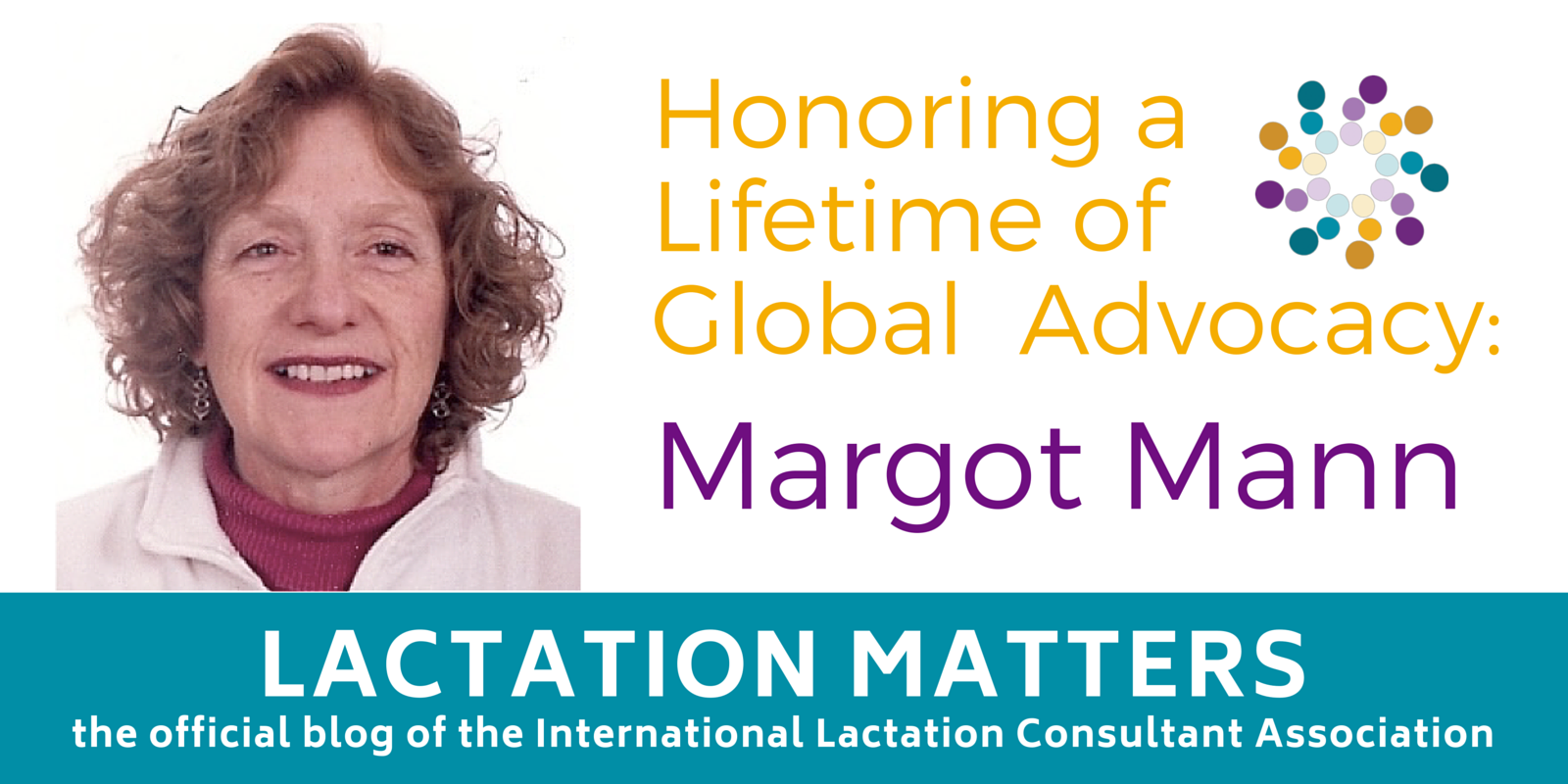 At #ILCA16 today, Margot Mann, IBCLC, RLC, BA, was honored for her lifetime of advocacy work on behalf of breastfeeding families and the IBCLC. From her role as ILCA’s Vice President for External Affairs, to her groundbreaking work elevating lactation in the global arena, Mann’s policy work has no doubt preserved, promoted, and protected breastfeeding.

We asked Margot to tell us about herself and her more than thirty years of work in the lactation field. Please join us in honoring Mann’s ILCA Lifetime Achievement Award while learning about this important history for the profession.

Tell us about where you live.

I live in Riverdale in the Bronx, New York City. I was born in Leeton, a little country town in Australia. I grew up in Melbourne and moved to the US when my first two children were very young.

What is your role in lactation?

I have multiple roles: clinician, educator, policy maker and advocate for breastfeeding, mothers, babies, families and the IBCLC profession.

Please tell us about the many “firsts” you have had as a groundbreaking leader in lactation.

In 1991, I set up the lactation program at Magee Women’s Hospital in Pittsburgh. At that time, it was the country’s largest private women’s hospital, delivering 10,000 babies per year with low breastfeeding rates. I wrote breastfeeding policies, gave in-services to the nursing staff, helped nursing mothers in need, and provided Grand Rounds to physicians. The program continues and breastfeeding rates have risen.

In 1986 I set up the first lactation consultant private practice in Queens, New York.

What calls you to lactation work?

Before my children were born, I was a high school teacher. Being a full-time mother, carrying, birthing, nursing and raising my children to be happy, healthy, contributing members of society is the thing that I am most proud of. Breastfeeding was easy for me. My babies taught me how to do it and I had wonderful support from my family. I was sorry to see how many other mothers were frustrated and had difficulty breastfeeding. I felt they and their babies were cheated of the support they needed. I repeatedly saw evidence of the impact of flawed advice they received from healthcare providers and others. I wanted to help mothers have the pleasures of nursing that I had experienced.

So, I became a La Leche League leader. Then, the International Board of Lactation Consultant Examiners (IBLCE) was formed and in 1986, I became International Board Certified Lactation Consultant. It is a privilege and great pleasure to help mothers in the process of matrescence to achieve their nursing goals. I feel very lucky to be doing this work.

What is your proudest accomplishment as a policy advocate?

My personal role was minor, but it is gratifying to see the growing respect given to lactation consultants and the specialized help we offer to nursing dyads. My role in policy work has spanned over 30 years, from representing La Leche League International at the UN to presenting ILCA’s credentials to the UN Economic and Social Council in 1995, and onward until this year.

In the 1980’s, WHO and UNICEF’s child mortality prevention strategy was “GOBI” – Growth monitoring, Oral rehydration, Breastfeeding and Immunization. The need for support for the “B” was rarely recognized. At NGO Committee on UNICEF (NGOCU) meetings, I repeatedly reminded participants, “But but but, don’t forget the B of breastfeeding. It needs protection, promotion and support.”

To build support for the “B”, I created a very well attended day-long seminar at the UN, “Breastfeeding: The Passport for Life,” along with Beth Styer. The goal was to educate and sensitize all mother and child advocates to the importance of breastfeeding in child mortality and morbidity reduction. We were VERY surprised by the attendance and excitement this seminar generated. It seemed to make our voice at the NGOCU meetings more valued. The issues of breastfeeding simply had not been considered by NGOCU participants as anything that needed to be considered. Breastfeeding was seen as a good idea, but didn’t every mother have breasts and the option to decide whether or not to use them to feed her baby? There was no understanding that this option could be undermined or needed support.

At the UN, I was one of many who contributed to the writing of the Convention on the Rights on the Child and the Global Strategy for Infant and Young Child Feeding, advocating for breastfeeding dyads. It was very exciting to see some of our language included in the final documents.

To create a stronger breastfeeding lobby, I created a UN Breastfeeding Advocacy Team (UNBAT) uniting NGOs who recognized the importance of breastfeeding. The UNBAT name added power and lent credibility to our efforts at the UN General Assembly Special Session. The UNBAT name made it possible for us to make a few “interventions” (i.e. speak from the floor of the UN General Assembly) to make our recommendation for policy changes directly to the delegates.

As ILCA’s Vice President for External Affairs (2000 – 2004) I reached out to international health professional organizations to encourage them to adopt the Global Strategy for Infant and Young Child Feeding. Some did, while others probably became aware of GSFIYCF for the first time.

I sought out talented IBCLCs and LLLLs to share in the work at the UN and helped them learn how to do this sensitive, diplomatic advocacy work. There is now a global Breastfeeding Advocacy Initiative led by UNICEF and WHO which builds on this early international work and holds great hope for greater protection, promotion, and support of breastfeeding. ILCA remains a part of this work.

Wasn’t I lucky to have been given such an opportunity to participate and influence global policy and promote the work of IBCLCs?

Above all, every mother I have been able to help with her maternal role of breastfeeding thrills me. I consider myself a lucky lady!

I thank my children for teaching me how to nurse and the need to respect each baby as an individual with unique needs. And I thank my husband and partner, John Mann, who was such an enormous support in my mothering and professional work, and my parents and family who were with me all the way. And I deeply appreciate the inspiration and wisdom from colleagues from whom I learned so much, especially people, like the late Chris Mulford who wrote the bulk of the UNBAT position papers we presented at the UN.

We are grateful to Margot for her incredible work to promote, protect, and support breastfeeding.

7 Responses to Honoring a Lifetime of Global Advocacy: Margot Mann