By lactationmatters on 13 March 2017 in Uncategorized 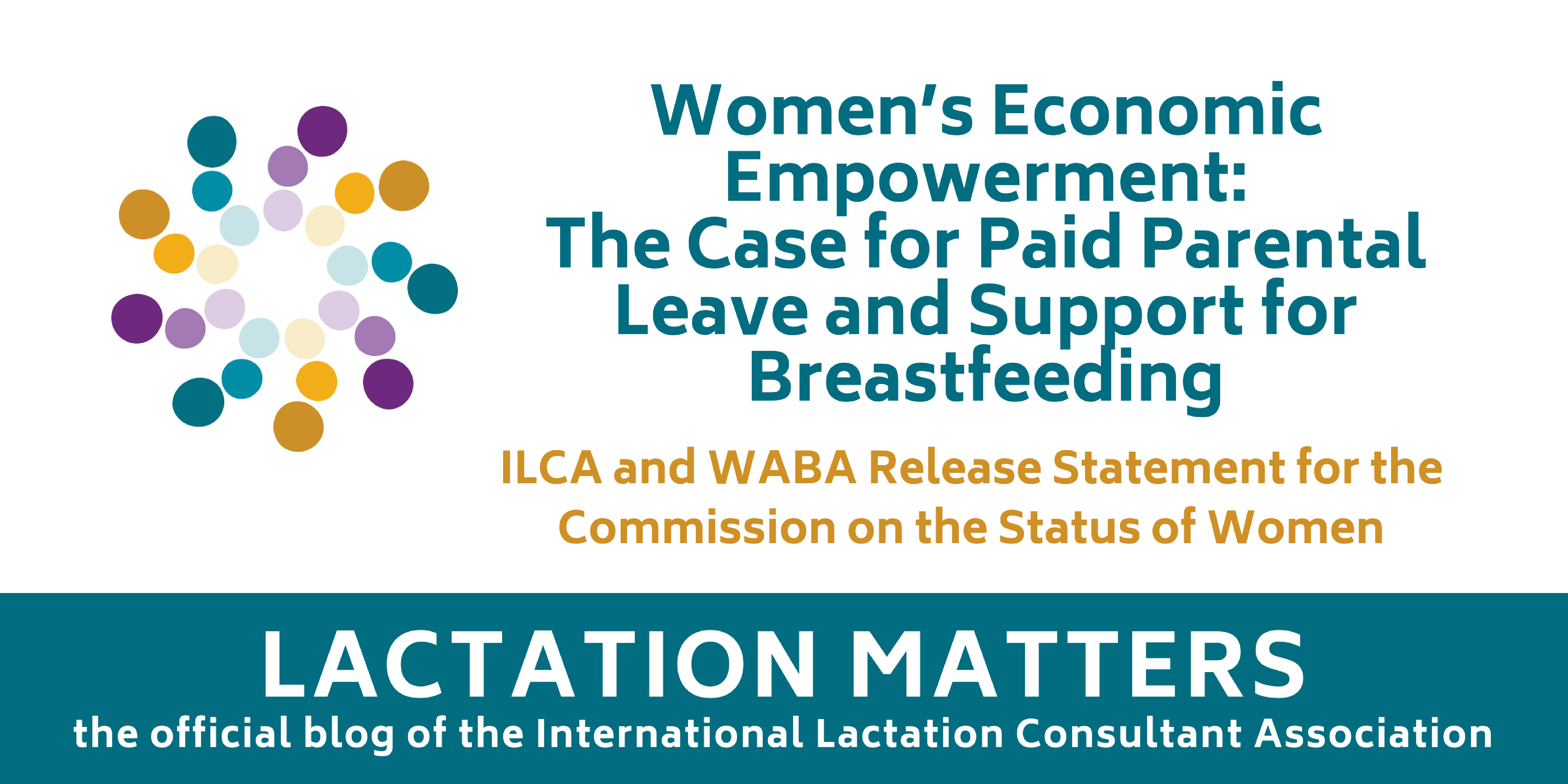 Every day, ILCA is working in public and behind the scenes to promote the role of breastfeeding in transforming world health.

One critical arena for our work is the Commission on the Status of Women (CSW). The CSW is so important to our work because it is the “the principal global intergovernmental body exclusively dedicated to the promotion of gender equality and the empowerment of women.”

Their role is to promote women’s rights around the globe. That is why we believe it is critical to elevate breastfeeding, and specifically, paid parental leave to support breastfeeding, at CSW.

The International Lactation Consultant Association  (ILCA) and the World Alliance for Breastfeeding Action (WABA) have released the following statement in support of the sixty-first session of the Commission on the Status of Women at the United Nations Headquarters in New York, USA 13-24 March 2017.

You can read the statement below. You can also find it on the ILCA website in our resources section for future reference.

Breastfeeding provides a strong foundation for the economic empowerment of families throughout the world. In addition to improving maternal and child health, supporting recommended breastfeeding practices could save annually an estimated $302 billion USD globally.

A robust body of evidence demonstrates that breastfeeding contributes to improved maternal and child health, across the life course. Optimal breastfeeding is associated with higher educational attainment and economic productivity of women and girls in adulthood.

A major gap in advancing women’s economic empowerment are policies and practices that also support women’s work as mothers and family caregivers. Perhaps the greatest gap can be found in the lack of adequate support for breastfeeding mothers and infants.

Therefore, the purpose of this statement is to make a case for women’s economic empowerment, specifically through paid parental leave in support of breastfeeding.

The Beijing Declaration and Platform for Action calls upon governments to ensure that legislation, incentives, and appropriate institutional support systems empower women and parents to balance breastfeeding with the demands of women’s labour.

Poverty is a barrier to optimal breastfeeding globally. The Commission on the Status of Women 2016 released a report revealed that among the estimated 43% of people living in severe poverty 70% are women, youth and children. Women and girls living in poverty carry a disproportionate burden of unpaid labour, which in turn leads to poverty across generations. Women in impoverished settings may spend up to 80 hours per week on family care, cooking, cleaning, wood and water fetching, which is the equivalent of two full time jobs. As a result impoverished girls and women are often unable to complete an education and find safe wage-based employment that may lead to improved economic standing for their families and communities. Women and children living in fragile settings are especially vulnerable to the poverty-generating impacts of climate change, forced migration, war, epidemics, and disasters. Suboptimal breastfeeding is also associated with decreased birth spacing, which is a risk factor of both perinatal morbidity and mortality and increased global population growth.

Today’s global economic and labour conditions are changing rapidly, and has led to improvements in women’s participation in local and global economies. However, the benefits of paid labour do not reach all women and families equally. Women continue to participate in labour markets on an unequal basis with men. In 2013, the male employment-to-population ratio stood at 72.2 per cent, while the ratio for females was 47.1 per cent. About 830 million women, mainly in low-income countries, lack social protection for oppressive working conditions. Women in these settings typically have access only to low-paying jobs with poor, and often violent, working conditions. Only 53% of countries meet the International Labour Organisation’s 14-week minimum standard for maternity leave. Together, these factors create insurmountable challenges to mothers breastfeeding as recommended by the World Health Organization and numerous maternal-child health organizations.

Several international conventions and instruments support global maternal- and parental- workplace and breastfeeding empowerment, including The Convention on Elimination of All Forms of Discrimination Against Women, the Convention on the Rights of the Child, the Innocenti Declaration on the Protection, Promotion and Support of Breastfeeding, the Global Strategy for Infant and Young Child Feeding and the International Labour Organisation Convention on Maternity Protection.

Women’s economic empowerment is inextricably linked to women’s empowerment as mothers and primary infant caregivers. The needed support includes, but is not limited to, actions that extend access to paid maternity or parental leave, paid breastfeeding breaks, and family friendly environments with flexible, baby-friendly working arrangements. It includes creating social support systems that value women, mothers, breastfeeding, and family care work. Such support systems will only be achieved by inclusion of all members of society, but particularly men, youth, grandparents, childcare providers, employers, and policy makers, in recognizing the importance of women’s economic and maternal empowerment. By creating opportunities for equitable parental and domestic responsibilities, new pathways emerge for building gender equality at the home, the workplace, and society.

It is, therefore, urgent that breastfeeding advocates, together with women’s health, gender rights advocates, trade unionists, employers and governments, United Nations agencies and others seek collaborative ways to respond.

The World Alliance for Breastfeeding Action and the International Lactation Consultant Association believe that these actions to enhance paid parental leave and support for breastfeeding are essential to making women’s economic empowerment in the changing workforce.

Do you have questions about CSW, ILCA’s global agenda, or the role of paid parental leave on impacting breastfeeding? We want to hear from you! Please leave a comment.

3 Responses to Women’s Economic Empowerment: The Case for Paid Parental Leave and Support for Breastfeeding