By lactationmatters on 26 June 2017 in Uncategorized 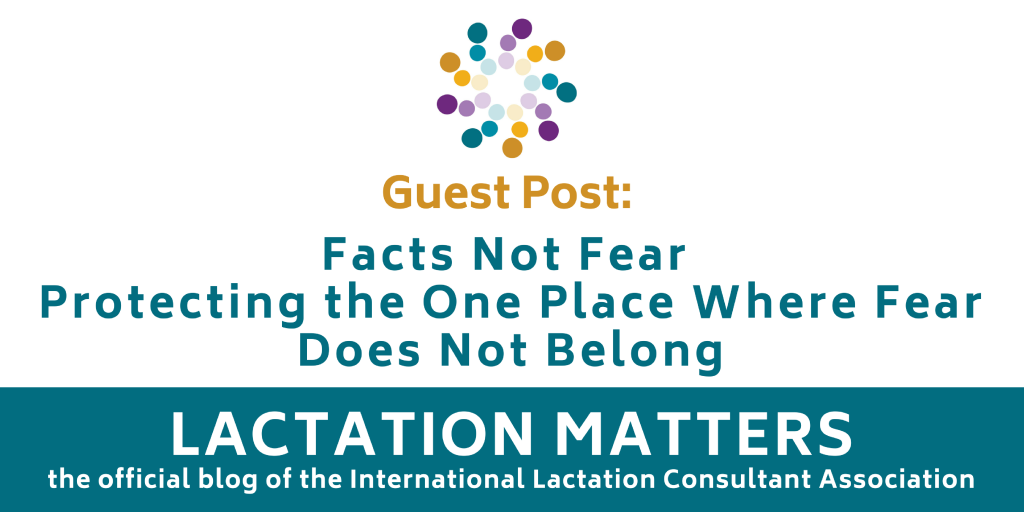 Today at Lactation Matters, we are sharing a guest post by Kimberly Seals Allers, a US-based journalist and infant health advocate. This post is a part of the #FactsNotFear campaign launched by 1,000 Days. To learn more, follow the #FactsNotFear hashtag on social media, including this post on Facebook at 1,000 Days.

We live in a world of fear. From the recent terrorist attacks in England to last year’s Orlando nightclub massacre. We have seen how the fear of outsiders has sparked powerful political movements around the world. As a frequent business traveler I sense my own anxiety as I sit on planes and trains, and as a mother I know the feeling that sweeps over me whenever I receive an incoming phone call from my children’s school.

Yes, we live in times of fear and anxiety—much of which is beyond our control.

But there is one place where fear should not exist. There is one area, where, as women and
mothers, that we should insist that fear not enter—that is in the precious act of feeding our babies. From the time they are first placed in our arms, we are anxious that we will do our best. Yes, we are nervous that we will make mistakes. But we should not be made to dread our ability to mother—particularly when it comes to feeding our infants—one of our very first tasks.

That’s why a recent spate of fear-based marketing, particularly from the Fed Is Best Foundation, stoking fears that exclusive breastfeeding kills babies is both erroneous and irresponsible. But it is also the type of insidious marketing that preys on a mother’s existing insecurities that should make all women concerned. If the only way Fed Is Best can make its point is by sensationalizing infant deaths and undermining our confidence in our bodies—then maybe their point needs to be carefully considered.

Or, as women, we insist that they make it with valid facts and sans the fear mongering.

Let’s face it, women are sold fear and anxiety as a marketing tool every day. In fact, the strategy, officially known in business circles as FUD—fear, uncertainty and doubt—was designed by an IBM executive decades ago to persuade buyers to feel “safe” with IBM products rather than risk a crash, virus or server disruption. By the early 90’s it was generalized to refer to any kind of misinformation used as a competitive weapon.

Today, weaponizing fear takes many forms. We fear our faces aren’t pretty enough, so we buy cosmetics. We worry that our body isn’t the right “type” so we are sold diet plans and surgical procedures. We are told our hair isn’t shiny, bouncy or thick enough so we are sold multitudinous hair products. And then we are told to fear that our bodies may not properly do what they are biologically made to do, and we are sold infant formula.

The truth is, our bodies were uniquely made to feed the infants we create. Decades of scientific research proves that formula is nutritionally inferior to breastmilk. Admittedly, societal pressures, structural barriers such as a lack of paid maternity leave, and physicians who receive little to no training in lactation science in medical school, make it very difficult for some women to fulfill their biological norm. Many women who want to breastfeed find undereducated physicians and nurses and limited post-natal support—particularly in the early days after discharge. We have much to overcome.

To be clear, infant formula is necessary. When a mother’s own breastmilk or human donor milk is not available, then infant formula is an important third option that can, at times, save lives. However, women should come to that decision fully informed, not because of marketing efforts designed to incite distrust in their own bodies or threatened with the fear of the death of their infant.

It’s no secret that, especially in the Western world, women already fear they will have insufficient milk. For some, this fear can become a self-fulfilling prophecy because fear and anxiety can literally limit lactation by stifling the letdown reflex that stimulates the milk glands. Feeding into this insecurity by promoting early formula supplementation “just in case” has been a go-to move by the formula industry for years.

As far back as the 1940s, the manufacturers of Borden KLIM evaporated milk ran a radio jingle in the Congo that stoked mother’s fears over insufficient milk. The song went:

So when Fed Is Best frequently promotes eerily similar headlines claiming, “One bottle would have saved my baby”—it seems to make early supplementation innocuous, while deploying a similar tactic used to spur sales of infant formula. The insidious message is that your breast cannot be trusted but a bottle can—this type of marketing should concern all women.

Instead of fear, we should demand the facts about why physicians and nurses don’t have more education to properly identify lactation dysfunction or failure. We should demand knowledge about other options to increase milk output such as hand expression, which can extract more milk than a pump. If formula must be used, it should be administered as a temporary bridge until a mother’s supply is established, not a breastfeeding killer for mothers who want to nurse. And we should demand standard home visitation immediately after discharge, as is the practice in the UK and other European countries.

Ultimately, women deserve facts not fear. Women have a right to guilt-free, confidence-building information and support. And it’s time that we demand it of everyone—including, and especially, from those claiming to support mothers. We cannot stand by while Fed Is Best insists that fear is best.

4 Responses to Guest Post – Facts Not Fear: Protecting the One Place Where Fear Does Not Belong