By lactationmatters on 23 July 2017 in Uncategorized 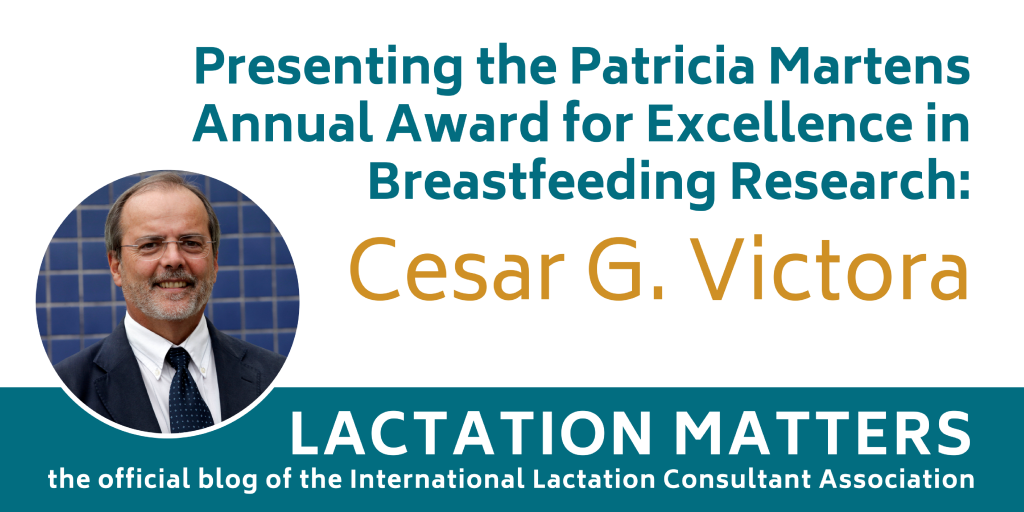 At #ILCA17, the Journal of Human Lactation awarded the Patricia Martens Annual Award for Excellent in Breastfeeding Research to Dr. Cesar Victora. This award is given, in memory of Patricia Martens, to a senior researcher with a history of excellence in breastfeeding research, which has had an international impact on advancing our knowledge and practice about human lactation and breastfeeding. The award recipient is chosen by the JHL Editorial Review Board. We recently caught up with Dr. Victora to find out more about his research and how he came to be interested in supporting lactating families through his research.

Share with us your research interests and what led you to focus your efforts in this area.

I have focused on three main areas of research, all related to child health and development in low and middle-income countries. The first area includes the short- and long-term consequences of early life exposures, during the first 1,000 days from conception to the age of two years. I am one of the coordinators of four birth cohort studies in the city of Pelotas, Brazil, where I live, of which the longest running study started in 1982 and is still going on. The second area is the evaluation of how large-scale health and nutrition programs have an impact on child health. And the third, to which I dedicate most of my time at present, is the documentation and monitoring of socioeconomic and other inequalities in the health of children, and in the reproductive health of women.

While practicing in Brazilian slums during the 1970s, soon after I finished medical school, I became more and more frustrated by seeing the same children coming back to the clinic with infections and undernutrition. I would treat one disease episode at a time, but the children kept returning with related conditions. This is when I decided to study epidemiology and became interested in breastfeeding as an affordable, effective intervention against many infectious diseases. 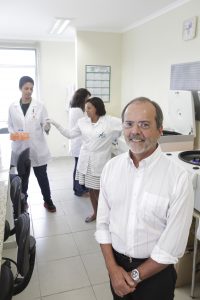 We are honored to celebrate your lifetime of work in breastfeeding research. What has been your most influential work? What is your most personal?

I believe that my most influential work was a study that led to two papers published in 1987 (in The Lancet) and 1989 (in American Journal of Epidemiology), showing for the first time that exclusive breastfeeding prevented deaths due to infections, particularly diarrhea. These findings were corroborated by other studies and led the World Health Organization and UNICEF to recommend exclusive breastfeeding in the early 1990s, which up to that time was an unusual practice for mothers anywhere in the world. I am also proud of my involvement in the World Health Organization Child Growth Standards based on breastfed children, which are now adopted by about 150 countries around the world.

My most personal work? This is a difficult question, but I am proud of being part of a hugely motivated team of Brazilians who have worked for the promotion, support and protection of breastfeeding. As a result of our collective effort, the total duration of breastfeeding in my country increased from 2.5 months in the 1970s to over 12 months at present, which is probably the greatest progress ever achieved by any country.

What research should we watch for coming up from you?

I am more and more involved in global child health, particularly in the challenge of ensuring that affordable, cost-effective health interventions reach those women and children at greatest need. I have set up the International Center for Equity in Health here at the University of Pelotas, in which we collect data from over 100 countries to identify which women and children, within each country, are being left behind. We then analyze these data and feed the results back to policymakers around to world, as part of an initiative called “Countdown to 2030” aimed at supporting countries to reach the United Nations’ Sustainable Development Goals for women’s and children’s health.

We are grateful to honor Dr. Victora for his work and we are not alone! He recently was awarded the John Dirks Canada Gairdner Global Health Award “for outstanding contributions to maternal and child health and nutrition in low and middle income countries, with particular focus on the impact of exclusive breastfeeding on infant mortality and on the long-term impact of early-life nutrition.” This award is one of the world’s most prestigious awards recognizing excellence in global health research. Read more about his receiving of this prestigious award at the following links.

Cesar G. Victora is Emeritus Professor of Epidemiology at the Federal University of Pelotas in Brazil, where he works since 1977. He has honorary appointments at Harvard, Oxford and Johns Hopkins Universities, and at the London School of Hygiene and Tropical Medicine. He has conducted extensive research in maternal and child health and nutrition, birth cohort studies, inequalities in health, and on the evaluation of the impact of major global health programs in a large number of countries. He was a founding member of the Countdown to 2015: Maternal, Newborn and Child Health” initiative aimed at monitoring the Millennium Development Goals, and currently acts as Interim Director of the Countdown to 2030 initiative aimed at monitoring the Sustainable Development Goals. In Pelotas, he coordinates the International Center for Equity in Health, which produces disaggregated analyses of indicators on women’s and children’s health and nutrition for the World Health Organization’s Health Equity Monitor and for the Countdown to 2030. He has over 600 peer-reviewed publications and is a member of the editorial boards of several journals, including The Lancet. He was President of the International Epidemiological Association (2011-14), and won the Canada Gairdner Global Health Award in 2017.