By lactationmatters on 24 July 2017 in Uncategorized 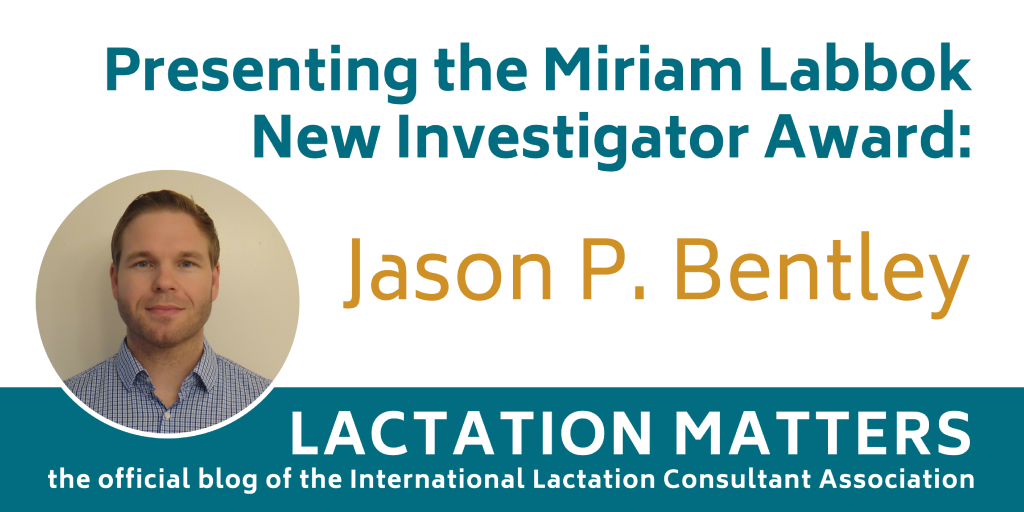 At #ILCA17, the Journal of Human Lactation awarded the Miriam Labbok New Investigator Award to Jason P. Bentley, MBioStat for his paper “Factors associated with recurrent infant feeding practices in subsequent births: A population-based longitudinal study.” This award, given for the first time in memory of Miriam Labbok, honors excellence in student research. The winner is chosen by the JHL Editorial Team. We recently caught up with Jason to find out more about his paper and how he came to be interested in lactation research.

Share with us your research interests and what led you to focus your efforts in this area.

Through both work and study, I became very interested in the health of mothers and their infants. In particular, the idea of a healthy start to life led me to do my PhD. Also, as a statistician and health researcher, I have a particular interest in using large administrative data sources to investigate longitudinal patterns in health. As part of the background work for my PhD, it was very apparent that breastfeeding policy and promotion is an important aspect of a healthy start to life. We found good evidence for factors affecting breastfeeding success at different time points, as well as duration. However, what was lacking were studies assessing changes over time. In particular, there was a paucity of evidence about factors associated with changes in breastfeeding behavior across subsequent births; an important area given it is well known that previous breastfeeding experiences substantially influence subsequent breastfeeding outcomes.

Your award-winning paper addresses what factors lead to either breastfeeding or formula-feeding in subsequent births. What do you think the key takeaways are for individual IBCLCs® working directly with families?

And what do you think the policy implications are for this research?

Our congratulations on the award! What research should we watch for coming up from you?

We have actually just had a paper accepted for publication in Birth entitled “Formula supplementation in hospital and subsequent feeding at discharge among women who intended to exclusively breastfeed: An administrative data retrospective cohort study” that will be available online shortly. This is similar in idea to our JHL paper except it explores factors affecting infant feeding at discharge after in-hospital formula supplementation. We have a couple of other studies in the works along a similar line regarding patterns of breastfeeding at different time scales.

Jason Bentley is a biostatistician and health researcher with a particular interest in using large routinely collected administrative data to support evidence driven policy for maternal and child health. Jason has 8 years of experience in analyzing large population-based linked administrative data in New South Wales, Australia, and most recently, California in the United States.