By lactationmatters on 26 December 2017 in Uncategorized 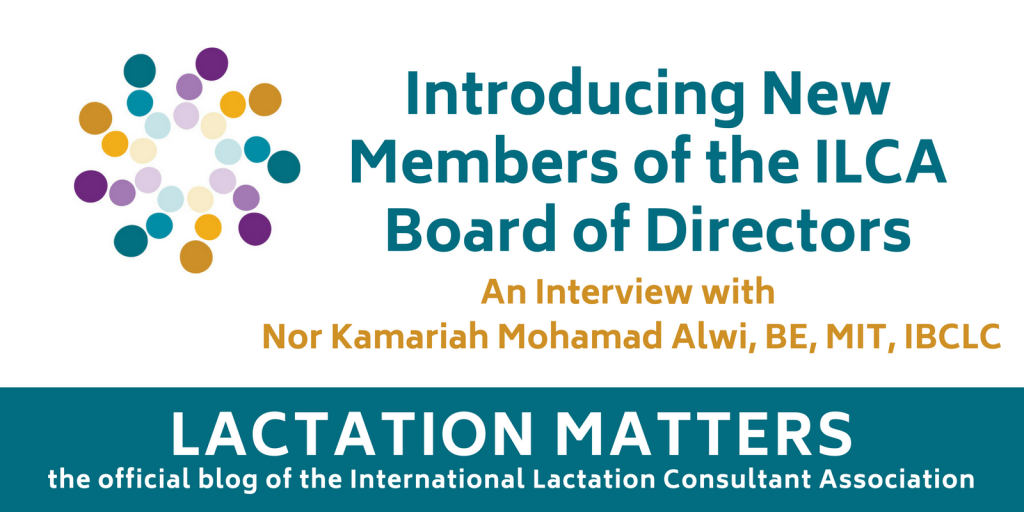 International Lactation Consultant Association® (ILCA®) would like to introduce the newest members of the ILCA Board of Directors, Sabeen Adil, Nor Kamariah Mohamad Alwi, and Iona Macnab, whose terms began in July 2017. The following interview with Nor Kamariah Mohamad Alwi is the second in a series of interviews with each of our new Board members.

Lactation Matters (LM): Tell us about what professional role you play in the lactation community.

I have been practicing as a lactation consultant in a private set up since 2008. Since then, I have been conducting breastfeeding classes, one-to-one consultations, and engaging with local and global breastfeeding communities.

In 2010, I was given the opportunity to lead the establishment of a nationwide peer counselor program in Malaysia, funded by UNICEF.

In 2015 and 2016, I participated in the production and translation of breastfeeding videos by the Global Health Media Project.

LM: What brought you to the lactation field?

NK: Like many other lactivists, I was first introduced to the world of lactation when I delivered my first daughter. While going through that amazing experience, I wondered how other mothers went through their own different experiences. My background in Information Technology led me to set up my own online web-based support group forums, called SusuIbu.com (“Susu Ibu” is “Mother’s Milk” in Malay). It was first established in 2004.

The online support group forums hosted lively breastfeeding-related discussions, mainly in the local “Bahasa Melayu” (Malay) language, and had served the local online community quite well for a few years, until they gradually moved to Facebook discussions.

Through SusuIbu.com, I learned that breastfeeding is more than just a special moment between a mother and her baby. It also plays a vital role in humankind. Promoting it is not enough: it needs to be supported and protected.

Since then, I never turned back. I pursued studies in this field whenever the opportunity presented itself. I am grateful to the local hospitals at the time, which offered me to join their BFHI courses for their staff. There I learned the basic skills of lactation management. Eventually, I started taking more online courses. Throughout the learning process, I practiced what I had learned while helping moms as peer support. In 2008, I sat for the IBCLC examination and passed. With that certification, I considered myself officially leaving the software engineer profession for good, and became a dedicated lactation consultant through my own private practice (which still carries the name SusuIbu.Com), until today.

LM: What is your role on the ILCA Board of Directors?

NK: Being the first ILCA board member coming from my home country, to be honest, I felt a bit overwhelmed at first. I feel that I have to play an important role in bringing issues or closing the gaps we had in the regions within ILCA outreach. I’m seeing myself like a swimmer, who may know how to swim in my local rivers, but now facing the challenge of swimming the wide open seas. I know for sure that I have to keep on swimming, and along the way I will eventually need to learn more skills in order to overcome the ocean tides and waves.

LM: What are the greatest opportunities you see for the board and the Global Collaboration and Equity Committees?

NK: With the new strategic plan that was initiated earlier, backed by the new members of the board coming from many different parts of the world, I see ILCA’s opportunity to engage with a wider range of lactation consultant communities, thus improving the breastfeeding situations through better collaborations between them.

I hope by being directly involved with ILCA through this opportunity, I will be able to facilitate further in the creation of a global platform for networking and communication throughout the regions.

Being part of a few representatives from the other side of the world, I hope this will bring balance to ILCA as a global organization.

LM: ILCA board members are unpaid volunteers that spend countless hours on all aspects of the organization. What inspires you to make this commitment to your profession?

NK: I’ve been a member of ILCA few years before I became an IBCLC and had benefitted from the association through the journals and conference. I was 2009 ILCA conference scholarship recipient. Back then, I was figuring out on how I could contribute back to ILCA in any way. This has become that opportunity for me.

Being part of an already established organization like ILCA will also mean finding ways to adapt to what has been planned, and finding gaps that can be filled. That is definitely one of the most priceless experiences that one could ever hope to go through.

Nor Kamariah Mohamad Alwi resides in Bandar Baru Bangi, Selangor, Malaysia. She created the online breastfeeding support forum susuibu.com in 2004 and is a co-founder and President of Malaysian Breastfeeding Peer Counselors. She is on the Local Governance Task Force Coordinator for World Alliance for Breastfeeding Action (WABA). Kamariah is working with IBCLCs to establish a Malaysian Lactation Consultant Association. She is currently a private practice lactation consultant. (Read more about Kamariah in her ILCA Board of Directors nominee profile.)