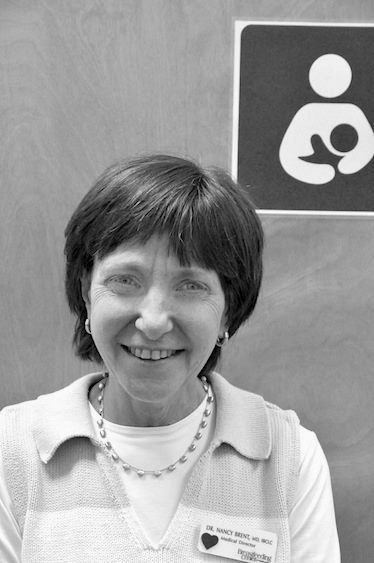 Dr. Nancy Brent, Medical Director of the Breastfeeding Center of Pittsburgh and a pediatrician at Kids Plus Pediatrics in Pittsburgh, has been named one of Baby Talk magazine’s seven national Pediatric Heroes for 2012. The award, announced at the recently concluded American Academy of Pediatrics National Conference and Exhibition in New Orleans, honors “the most innovative and inspiring doctors” in the country.

Dr. Brent was honored as a Pediatric Hero for her nationally acclaimed work in promoting and supporting breastfeeding, and in training physicians to do the same. A board-certified pediatrician since 1984 and an International Board Certified Lactation Consultant (IBCLC) since 1990, Dr. Brent has spent more than two decades at the forefront of Breastfeeding Medicine, leading the way both locally and nationally to bring critical, often hard-to-find services and support to breastfeeding mothers and babies, as well as to the doctors who care for them.

Ellen Rubin, an IBCLC who works at the Breastfeeding Center says,

“As a relatively new IBCLC, I could not have asked for any better opportunity than to work with Dr. Nancy Brent. She’s an an IBCLC-Pediatrician and an amazing teacher who always takes the time to share her knowledge and experience with me and the many residents and medical students who visit our clinic. Dr. Brent’s approach to breastfeeding is very well-rounded. While addressing each baby’s needs and well-being, she also takes into account each mother’s experience in the nursing relationship. Her medical expertise is a great asset, especially when babies are not gaining weight or are consistently fussy. So many complications are erroneously blamed on breastfeeding, and it makes a big difference when a medical professional can get to the root of a problem before breastfeeding is disrupted.”

Join us in congratulating Dr. Nancy Brent, IBCLC for the stellar work she is doing to support mothers and babies!

2
By lactationmatters on 19 October 2012 in Academy of Breastfeeding Medicine, Breastfeeding, Clinical Practice, Research

Occasionally on Lactation Matters, we find a blog post that is so incredibly important that we want to do everything in our power to make sure all ILCA members can read it.  This is just such a post from Dr. Alison Stuebe. Dr. Stuebe is a maternal-fetal medicine physician, breastfeeding research, and assistant professor of Obstetrics and Gynecology at the University of North Carolina School of Medicine. She is also a member of the board of the Academy of Breastfeeding Medicine. So often, as we study lactation, we talk about the “HOW”…this post asks “WHY”.  Thank you, Dr. Stuebe for allowing us to republish your blog post here on Lactation Matters. It was originally published on the Academy of Breastfeeding Medicine blog.

How Often Does Breastfeeding Just Not Work?

I was wondering if any comparative studies have been done on the statistics of lactation failure in various cultures both developed and less developed. Please post if you are aware of any – or any statistics on how many women’s milk never comes in (in the US), with a healthy full term new born, in an environment supportive of breastfeeding. We need to help mothers who struggle with this.”

That’s a great question – and a difficult one to answer. Marianne Neifert estimates that “as many as 5% of women may have primary insufficient lactation because of anatomic breast variations or medical illness that make them unable to produce a full milk supply despite heroic efforts.”   [Neifert MR (2001). “Prevention of breastfeeding tragedies.” Pediatr Clin North Am 48(2): 273-97.]

We are working on a research project to try to estimate the proportion of women in the Infant Feeding Practices Survey II who experienced unplanned, undesired weaning due to physiologic problems with breastfeeding. One challenge is what to call this condition. I’ve written a draft of the paper using the term “failed lactation,” but I don’t like it.  I have problems using the word “failed” to describe mothers who have gone to heroic lengths to sustain breastfeeding. We’ve also tossed around “lactation dysfunction” or “unwanted weaning,” but those don’t quite cut it either. I want a phrase that health care providers will take seriously and moms will perceive as a lifeboat in a storm, not as insult added to injury. My personal favorite is “Lactastrophe,” but I suspect that would not make its way into the medical lexicon. What do you think we should call it when lactation doesn’t work?

We’re also finding that it’s quite difficult to tease out the issue of “a supportive environment” vs biological problems with lactation. It’s a bit like trying to tease out how much of the type 2 diabetes epidemic is caused by “biology” vs “the environment.”  Over the past two decades, the proportion of our population that is obese has sky-rocketed, in the setting of decreasing physical activity, ballooning portion sizes, neighborhoods without sidewalks, and worsening economic inequality and job insecurity. Some people who live in this country have developed diabetes, and some have not.  It’s likely that some individuals have a biological predisposition that makes them vulnerable, whereas others do not. Regardless of the precipitating factor, however, these patients need help to control their blood sugars.

Similarly, for lactation, there are some mothers who are blessed with ample milk supplies and with babies who are born with a championship suck-swallow pattern, and they would be likely to breastfeed successfully in just about any environment. And there are other dyads for whom one piece of bad advice or a nasty encounter with a stranger while breastfeeding in public is enough to throw lactation completely off track.  Furthermore, it’s likely that women who have been socialized to mistrust their bodies are more vulnerable to interpreting early feeding challenges as evidence that their bodies can’t sustain breastfeeding– and they are thus more likely to wean and attribute their decision to a physiological problem.

From a health and wellbeing perspective, however, I’m not sure that it matters whether we “count” both “biological” and “perceived” insufficient lactation together. The total burden of this problem is enormous, and mothers are suffering, whether they lack glandular tissue and or they lack self-efficacy and support.  We need mothers for whom lactation doesn’t work to know that they are not alone.  And we need to demand research to develop the tools that will identify the underlying problems and allow us to implement the appropriate treatment.

We also need to step back from assertions that every mother can breastfeed, if she just tries hard enough. As Neifert has written, “The bold claims made about the infallibility of lactation are not cited about any other physiologic processes. A health care professional would never tell a diabetic woman that ‘every pancreas can make insulin’ or insist to a devastated infertility patient that ‘every woman can get pregnant.’ The fact is that lactation, like all physiologic functions, sometimes fails because of various medical causes.”

Lactation is part of normal human physiology, and like all other human physiology, it can fail. It’s time to stop bickering about whether this mom tried as hard as that mom to breastfeed. We have too much work to do.

Please take the opportunity to visit the Academy of Breastfeeding Medicine’s blog and leave your comments.