Tag Archives | Each One Reach One

By lactationmatters on 16 December 2014 in ILCA News

Participate in the Each One Reach One program! We respectfully request your help in encouraging your fellow lactation professionals to become members of ILCA.

Participate in the Each One, Reach One Campaign:

This campaign honors those who encourage others to join ILCA. New this year, we are offering a FREE STANDARD MEMBERSHIP to the ILCA member, in each of three categories, who refers the most members. Simply ask your colleagues who chose to join ILCA to include your name in the “Each One, Reach One” section.

Here’s other ways you can help advance the ILCA mission:

Let your colleagues know about ILCA membership and its benefits:

Encourage those who desire to enter the field that they might consider Student Membership:

ILCA offers membership to students enrolled with educational institutions or with lactation course providers at a significantly reduced rate. These student members have access to the full menu of benefits and can access the online Journal of Human Lactation. A member can qualify for student membership for up to two years.

Share how you have benefited from ILCA membership with your networks:

Connect with those in the lactation field via email, Facebook, Twitter, or other social media platform and encourage them to join.

If you have questions or need more information concerning ILCA member benefits, student membership, or the Each One, Reach One campaign, please contact us at membership@ilca.org or visit the ILCA website at www.ilca.org.

My first encounter with the International Lactation Consultant Association® (ILCA) was in the form of an email when I had just become an IBCLC. It was invitation to a trial membership, which of course I accepted. Although I did look around the articles online and found the information sheets invaluable, I thought naively that it looked like an interesting AMERICAN organization but too far across the Atlantic sea to be valuable to me in Great Britain.

A set of coincidences allowed me to embrace ILCA and become an avid fan! My inlaws celebrated their Jubilee anniversary in Tampa, Florida in July 2012. I had received the information about the 2012 ILCA Conference which looked amazing but again seemed quite unreachable. But then it clicked to me that I was going to be in Tampa just a few days before the conference in Orlando!

My first moves were to see if I could fit the days into our itinerary, enroll as a member of ILCA to get a great deal for the conference, and apply to Lactation Consultants Great Britain (LCGB) for some funding. All three tasks were completed quickly and successfully and I was off to Orlando for the conference. It was mind blowing! Luck was on my side as the oral skills sessions were full as I had signed so late so I attended the Spanish sessions, which I thought were incredibly well presented.

In the first session I actually sat next to Roberta Graham de Escobedo, without realizing the role she played on the ILCA Board of Directors. She was so welcoming and warm, no wonder she is in charge of ILCA memberships!

I remember thinking after the morning session, “This has already been so worth it! Thank be to God for all these coincidences!” The following day were the plenaries and I just could not believe how so many people together could share the same interest and passion as me!

I said hello to people I had met in the past and enjoyed all the networking from the International delegate gathering and meeting the Hispanic community. Being Mexican, married to a Peruvian/Italian/American citizen, having lived all over the world because my father was a Diplomat, and now residing in the UK, you can imagine how I feel like a true citizen of the world.

I came out of the conference feeling exhilarated, refreshed and uplifted. There are around 26,000 IBCLCs working around the world today, and only 423 of those are in the UK. The National Health Service has yet to recognize us so although there is a lot of work to be done nationally, it sometimes feel we are riding solo into the battle. I was really impressed as the group of IBCLCs in Orlando felt like a more cohesive united group with a true international presence from different fronts.

I swore that, if in the future, I had money to attend breastfeeding conferences, my priority would be on those produced by ILCA. The following year after I attended, I revisited the ILCA website to stay connected and read voraciously every Journal of Human Lactation I received through my subscription. 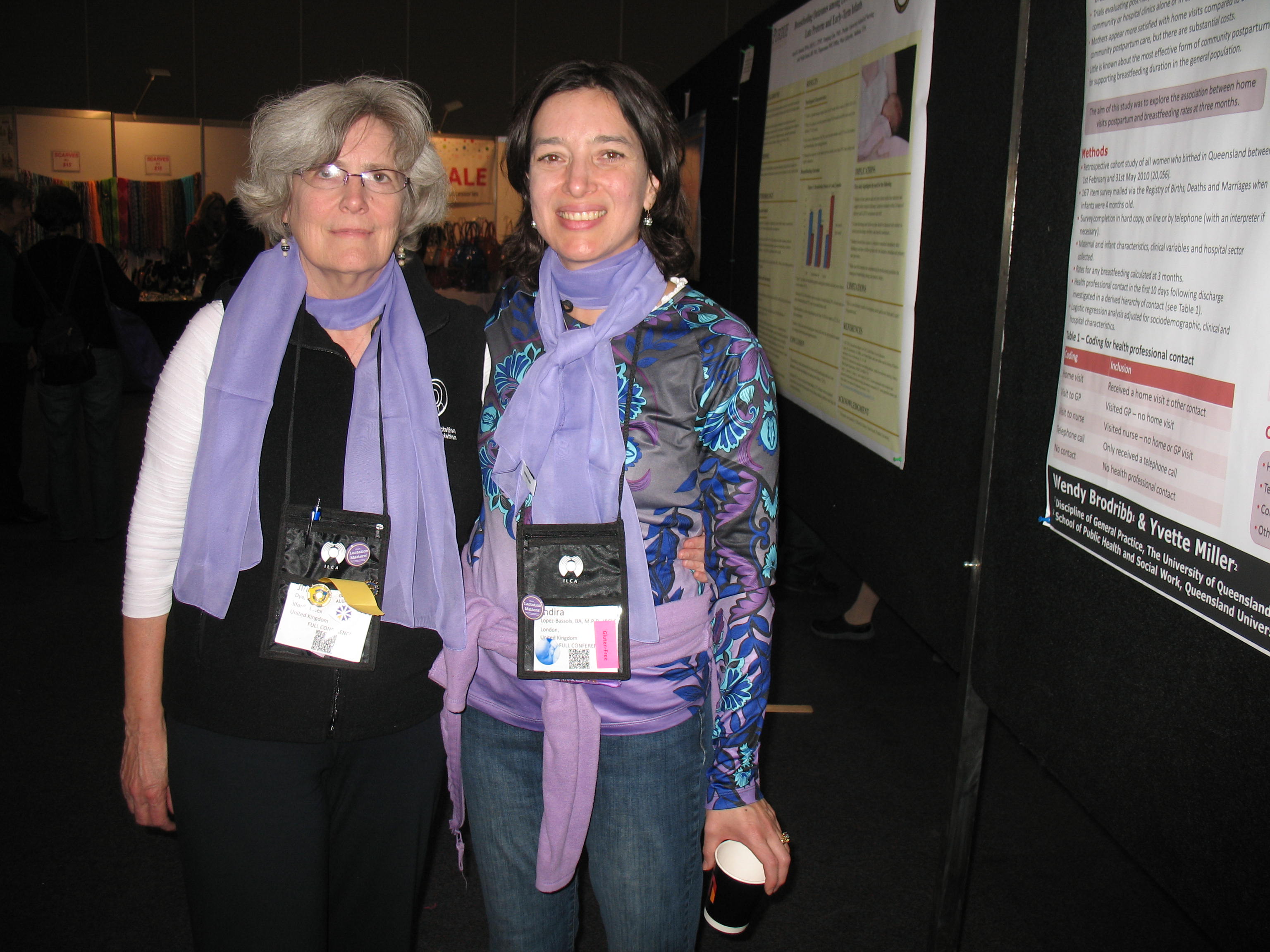 There are coincidences in life and we use them to craft our destiny. My next set of coincidences came in the form of another email I received, a reminder about the ILCA conference scholarships. I had no idea ILCA offered any type of scholarship. I still thought the 2013 conference in Melbourne, Australia was way too far away and expensive, so I didn’t imagine I could attend, even in my wildest dreams. But, I took a risk and emailed Glenna Thurston, who was in charge of ILCA Membership Development, to ask her about the application form and process as I might apply in the future to another ILCA Conference in the US which is closer and more accessible economically to London. Glenna kindly explained the process but did encourage me to apply to Melbourne anyway. I did so and was awarded a scholarship! I again applied to LCGB for a bit extra funding and I was able to cover airfare and the remainder of the conference fee. To make my trip possible, a friend of a friend that lived in Melbourne kindly opened his home for that week.

Two consecutive years, I was able to attend the ILCA Conference and I felt like I was in heaven. I enjoyed tremendously the whole experience. Before the conference started, I went on the guided tour to the Sanctuary where we saw Australian native species and learned about some of their mammal’s breastfeeding experiences. One of the IBCLCs shared that kangaroos make pink milk but none of the zoologists onsite could confirm that for us.

I enjoyed most of the sessions that I attended and found Linda Smith to be a wonderful presenter with a great sense of humor. Influenced by her, I will definitely be adding more humor to my teaching and presentations in the future. Nils Bergman’s presentation was also fantastic and particularly useful to have science affirm what we have known for millennia about attachment and separation.

This year, I, like many others, volunteered to help out at the Conference. I was a bit nervous the first time I stood in front of everybody to introduce the speaker but soon it became second nature. I had a strong gut feeling that, although I am, like we say in Spanish still a bit “fresh like a lettuce”, the day will come that I will be a presenter.

The pinnacle of the Melbourne Conference for me was a session I attended as part of the Oral Skills rotating session on supporting mothers with voluptuous breasts, presented Gini Baker and Decalie Brown. Gini asked for two volunteers to pretend they had voluptuous breasts and were having breastfeeding problems.It was slightly embarrassing but on the funny side as she made us feel all so comfortable. She reminded us gently that we were all on the same boat: the sisterhood. That was a highlight, an “aha” moment for me. It is truly a wonderful sisterhood, as we all speak the same language, we are all passionate about what we do, we are fanatics about supporting breastfeeding families, and most important of all: united we are stronger!

Joining ILCA is much more than getting a membership. It is also about being a part of the sisterhood of wise, passionate, bright women that are changing the world one breastfeeding baby and mother at a time.

If after reading this article you have been gently persuaded to become an ILCA member, please mention me through the Each One Reach One Campaign. The purpose of this campaign is to increase membership by spreading the word. Who knows? Your support may help me to attend a third ILCA Conference in the future.

Indira Lopez-Bassols, B.A. with Hons, M.P.P. and IBCLC, works in private practice in London and at Kings College Hospital Tongue Tie Clinic.   In addition, she leads the La Leche League Wimbledon group.  In combination with her doula work and her passion for teaching, she also offers breastfeeding study for doulas.  In her scare free time, she enjoys writing about birth and breastfeeding and has published in several related magazines.  She was awarded the 2013 ILCA scholarship to attend the organization’s annual conference in Melbourne, Australia.  For more information, visit: www.indirayoga.com