By lactationmatters on 17 November 2011 in Breastfeeding Around the Globe

If you missed the first installment of this article, please see The Essence of Nelson Babies Growing: Part One.

A planting area is born:
We approached the local city council for an area that would be appropriate. We also hoped it would be an area of significance in the region so that families would feel more compelled to plant there. We were delighted when they came back to us with the suggestion of the Centre of NZ where they have a conservation planting programme in progress and are looking for groups to contribute to the planting. This indeed was a significant area for Nelsonians!

The Centre of NZ is the geographical centre of New Zealand. It was deemed so by some surveyor in the UK when the early maps of New Zealand were being developed. Every year when I hike to the top of the hill I picture this surveyor as someone with a sense of humour. Of course the centre of NZ was never going to be on the flat fields all around the hill! 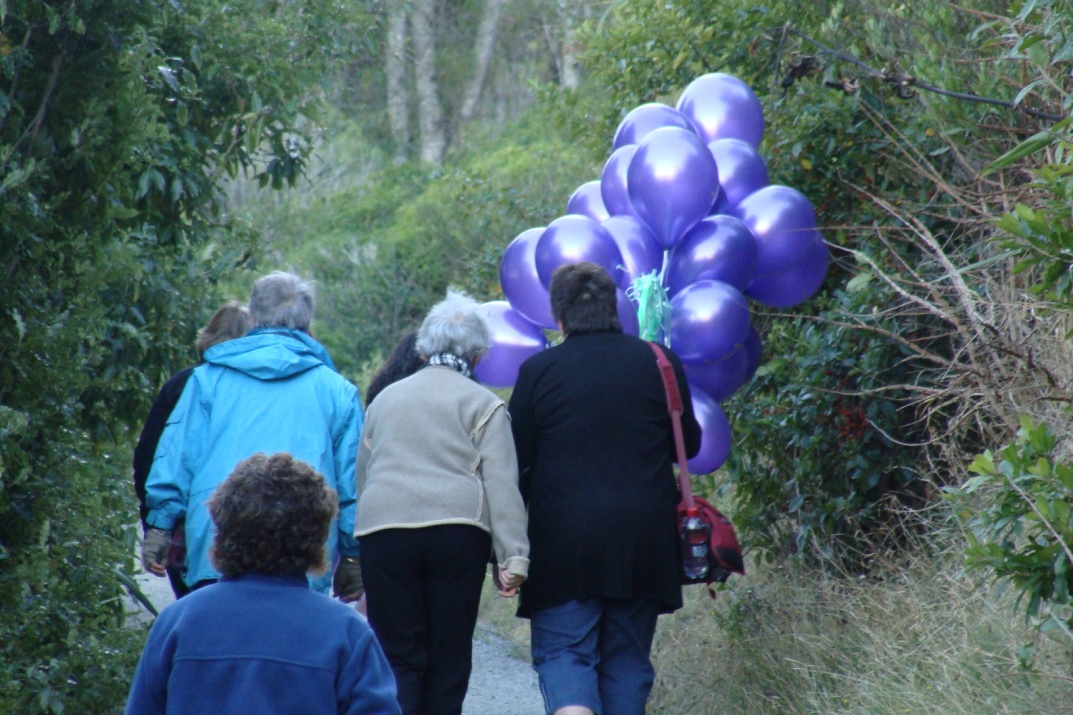 Hiking to the Centre of NZ

Since 2008, once a year, the local NZ College of Midwives, local iwi, and Nelson City Council, host a planting session in our newly formed whenua area. Representative of this are two large totara trees, which were planted at the start of the area and will stand over the area… and a third ‘Lyndell’ totara.

When we first started looking into providing a planting area, we did expect to come up against some obstruction, especially around burial of ‘body parts’.  Strangely enough placenta weren’t considered body parts. Or perhaps we can just be thankful to our maori forbearers who paved the way for us!  Checking health regulations, the only restriction was avoiding planting near waterways…easily done on a hill!

The fact that it is a re-vegetation planting area gave us clear guidelines and very little to discuss around ‘rules’ for the area. So we agreed to the council’s following conditions:

During the first year of planting, we had no idea how many families would take up the opportunity of this planting area. In this region there are around 1000 births per year. So it was a pleasant surprise to come over the brow of the hill and see the families who had made the trek. 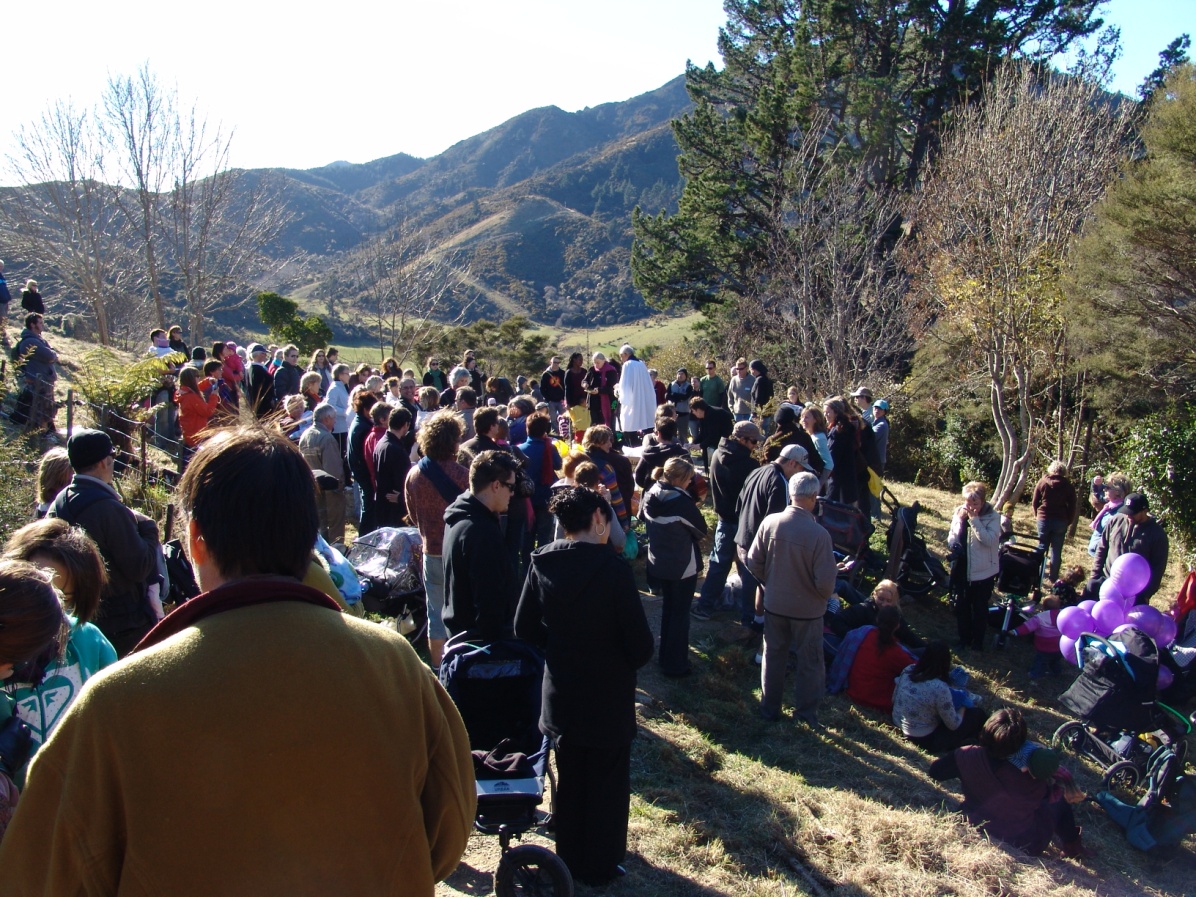 The land is blessed …. 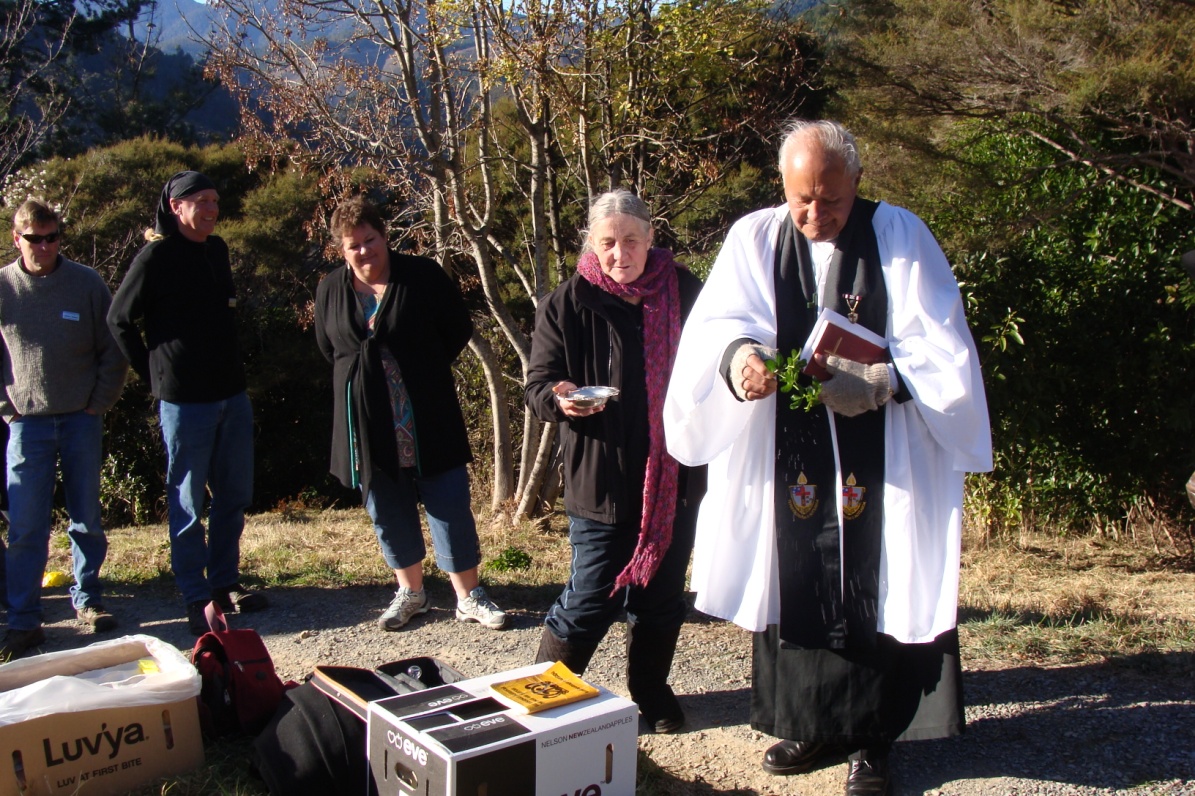 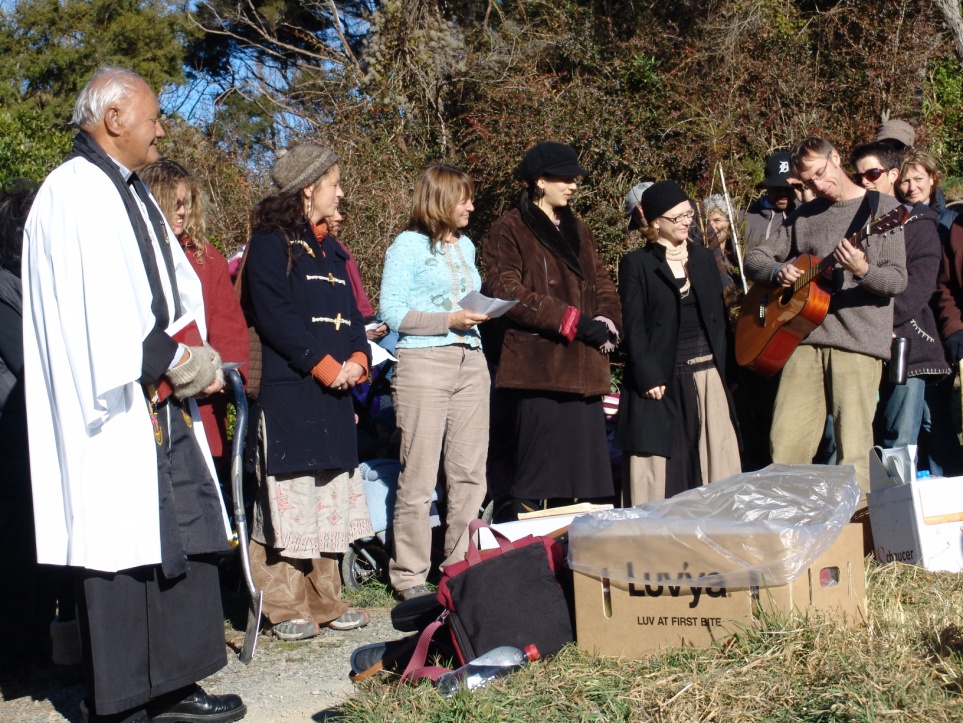 And the planting begins….. 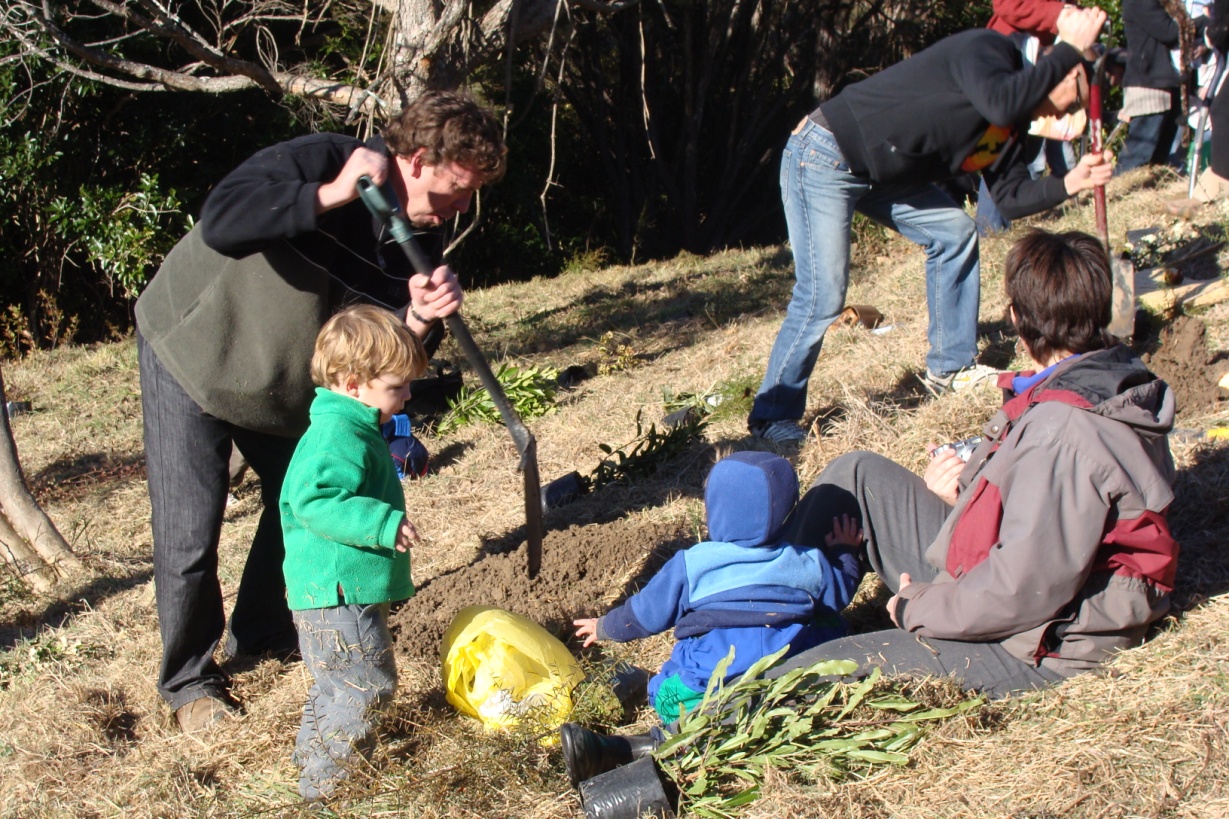 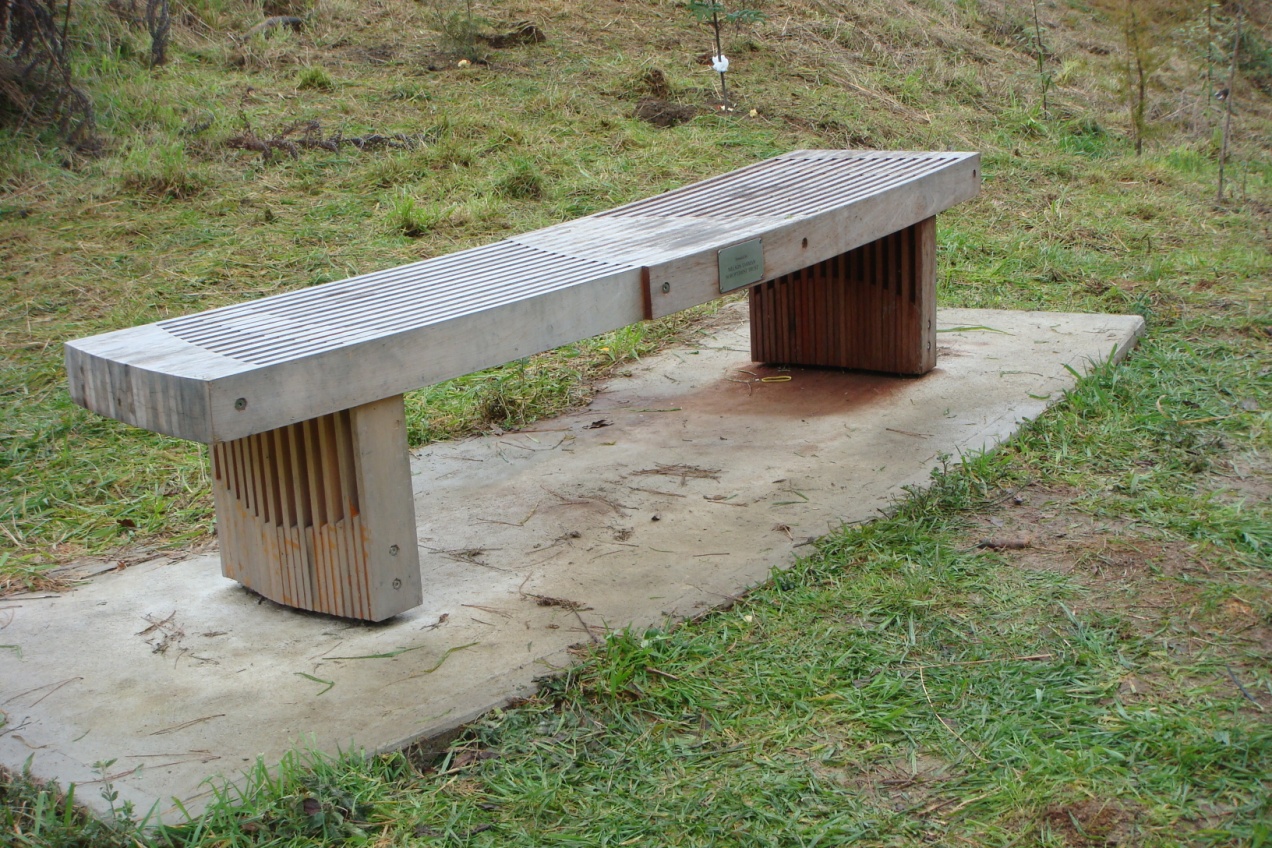 In 2010, the Nelson Soroptmist club provided a hand crafted seat for rest and reflection alongside the whenua planting area.  Maia Hegglun, local carver, builder and father, designed the seat from a cultural perspective, to compliment the Whenua Planting Project. The seat is designed as a sculpture telling the story of the seen and unseen aspects of two different cultures coming together and as a functional enduring seat to be used by families (whanau) and the public.

The area has not been without some interesting discussion. It has led some Maori to express some unease about the area. We left the idea with local iwi for some months for them to have a final say and we would have respected any unease they had, but this wasn’t to be the case.  Some Pakeha (European), especially of the mature generation, have also expressed an unease, (or more a queasiness!) about walking past an area where placenta are buried. We hope in time their queasiness will settle.  The dogs that walk with them seem relaxed and we haven’t had a single plant lost to dogs digging them up. The plants from the past three years are flourishing!

Families who have planted their whenua in the area use the walk as regular family time to check on the progress of ‘their’ plant.  They describe the area as ‘special’ and ‘peaceful’.

Indeed a special place to sit and reflect …Nelson babies growing the area, with flourishing plants representing how life moves on and along…

Toitu he kianga; whatungarongaro he tangata
People are transient things but the land endures

Over the past three years our annual ‘planting’ has caused reactions a plenty!  Families clambering up to New Zealand’s geographical Centre is not an unusual sight. Planting in a conservation area also is not unusual, however the ‘fertiliser’ used perhaps is somewhat different.

For New Zealand birthing families to be asked “Do you want to keep your placenta (whenua)?” following the birth of their child, is quite routine.  For those not of these shores we are greeted with a mixture of reactions.  Were it not for our indigenous Maori culture demanding respect of the whenua (placenta), such a question might not be so routine, but still viewed as slightly alternative.

Background:
In Maori culture whenu is the word for land and also the placenta (afterbirth).
All life is seen as being born from the womb of Paptuanuku, under the sea.
The lands that appear above the water are placentas from her womb.

Burying a whenua (placenta): Traditionally whenua and pito (umbilical cord) of newborn babies are buried in a significant place, in a specially prepared receptacle. This reinforces the relationship between the newborn child and the land of his/her birth.

Ipu whenua: the receptacle used to house the whenua (placenta) on its journey to its special resting place. Usually clay, it remains unfired to the land (also whenua), so too will the clay of the ipu break down and return to the land. The ipu is lined with absorbent materials such as moss, fern or hair to soak up any blood.

Traditionally Maori bury the whenua in a place of significance to the whanau (family) or ancestors.

It was in the 1930’s when medicine deemed birth to be far too dangerous to occur at home or private nursing homes that, within a 10 year period, all births occurred in one central hospital. The ‘ownership’ of the placenta (whenua), seemed to also be assumed to be that of ‘the hospital’! It took a further 30-40 years for Maori to freely be able to leave the hospital with their whenua (placenta) without an argument with hospital authorities ensuing. It is only in the past 20 years that the change to asking all birthing parents if they wish to keep their placenta has become ‘routine’.

The addition of planting a tree on top of the whenua (placenta) is relatively new, but is very popular with Maori and many non-Maori families.

As mentioned in a recent article by Kaumatua Pita Pou:
“It’s no surprise given the kiwi obsession with quite literally putting down roots. That dates back to before the earliest days of European settlement. Maori were known to plant cabbage trees to mark hunting tracks, while the puriri tree, with its sometimes gnarling branches, was used as a burial ‘cradle’. Bodies would be place inside the tree and left to decompose, with the bones later removed and placed in caves or ditches.
The purpose is for the tree to embrace the bodies …so the flesh returns to the earth”. (Ref. The Marlborough Express 1/1/2009 – History’s plantation threatened.)

Increasingly, European families, having experienced the life changing event of childbirth and parenting, also appreciate the significance of ‘honouring the whenua’. Many realise what an amazing organ it is that has sustained the life of their child over those formative months. 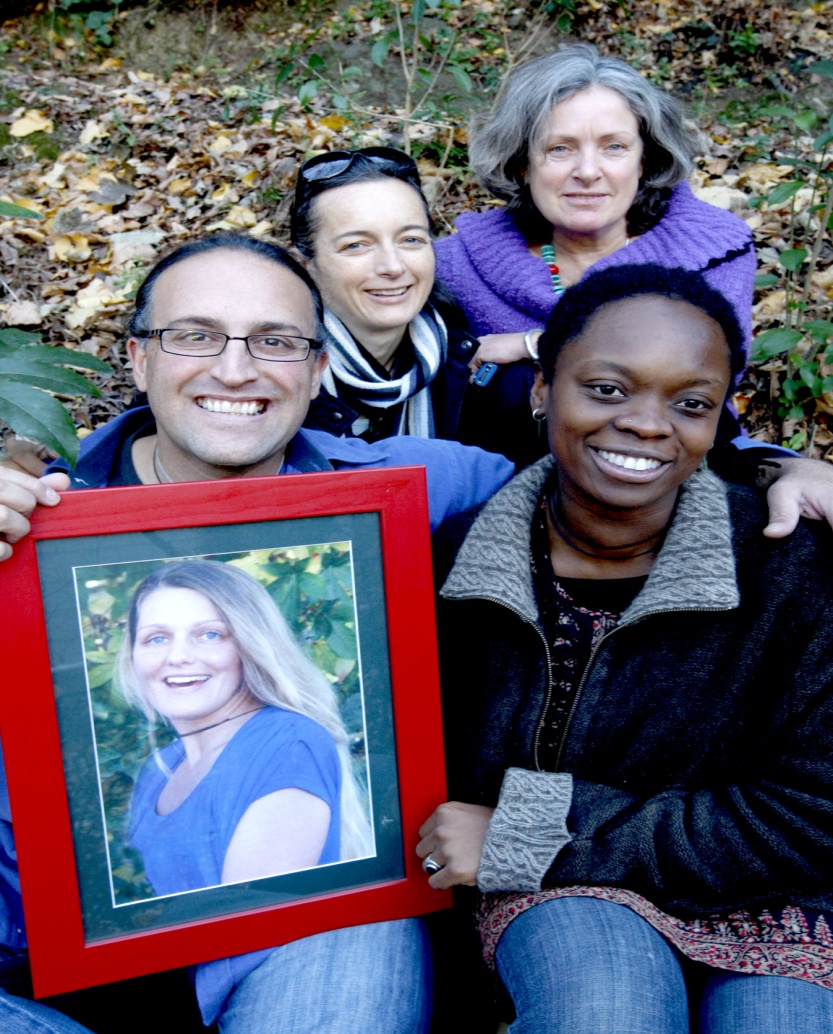 One of our local midwives, Lyndell Rown-Gabay, also held a ‘passion and respect’ for whenua – whenua the land and whenua the placenta. She was unable to bring herself to dispose of the whenua (placenta) in any other way but to bury them. So if parents didn’t want to do so themselves she would take them home, or under the cover of darkness, bury them in some more public place! The Centre of NZ, a local public walkway was one such place. Lyndell also had a flourishing garden!  In 2007, Lyndell died unexpectedly, at aged 40 years old.

Over the years, those of us who work as community  midwives, came to realise many families stored their placenta  in the freezer sometimes for many years. We would return for subsequent pregnancies for the family to joke – ‘oh great now we will have to make room in the freezer for another placenta’.

While many Maori families bury their whenua in a traditional area of their ancestors and iwi land, many don’t. Many young families, are more on the move these days and don’t put down roots in a particular property or are renting that property and don’t feel it is a significant place to them to go so far as planting their child’s whenua.

With this in mind and wanting to honour Lyndell and the work she did, it prompted us to establish a planting area in Nelson for everyone to use if they felt it was the appropriate place for them.

The Essence of Nelson Babies Growing: Part Two will be featured on November 17, 2011.