By lactationmatters on 29 November 2012 in Breastfeeding, Clinical Practice

Editor’s Note: This was first published on Tom Johnston’s Facebook Page which seeks to provide breastfeeding information to mothers. He has graciously allowed us to republish it here. 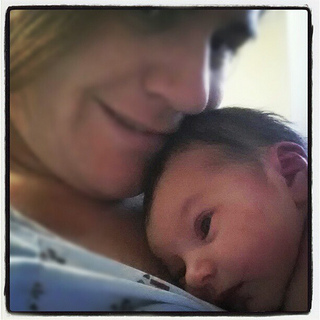 The vast majority of women who wean prematurely do so out of fears of inadequate milk supply. New mothers are in an incredibly vulnerable state and tend to blame every hiccup, every cry, and every fussy baby on herself and her milk supply. This often leaves new mothers feeling that they are failures because they were unable to breastfeed their babies and guilty because they are giving their baby formula which is known to increase the risk of countless childhood diseases. Fortunately, the perception of inadequate milk supply is often more of a misperception rather than a physiologic fact. That means that most women who wish to breastfeed after weaning can relactate and resume breastfeeding with the proper support and coaching.

Most women who have prematurely weaned and wish to relactate are good candidates for success. There is a small pool of mothers who find breastfeeding nearly impossible due to physical factors. Those with developmental abnormalities affecting the glandular tissue of the breast, endocrine disorders (disorders of the thyroid or pituitary gland), mothers of premature infants, and mothers who have never nursed may find relactation difficult. Most women however are healthy, have healthy term infants, and are likely to succeed, particularly if they have successfully nursed in past. There is even evidence suggesting that breast development during the first pregnancy and breastfeeding attempt is enhanced following the birth of a second child, even if the mother did not successfully breastfeed her first child.

Realistic Goals: Relactation can be time consuming and stressful and it may take several weeks to reach exclusive breastfeeding. While many women can successfully re-establish exclusive breastfeeding, there will be women who are unable, for myriad reasons, to exclusively breastfeed. I encourage women to set realistic goals on how long it will take to achieve success and what success will mean to her but to never give up. After all, a mother who is partially nursing while supplementing is still breastfeeding her child, whereas the mother who quits entirely is not breastfeeding at all. Success in relactation however, must be determined by the goals set by mothers, not lactation professionals.

Support: Lack of support leads to lack of confidence; lack of confidence leads to infrequent suckling; infrequent suckling leads to breastfeeding failure. All three are associated with less successful relactation. Breastfeeding mothers who suffer with feelings of inadequacy due to milk supply problems must be supported by their family and social groups if they hope to successfully relactate. Breastfeeding cannot be one of the many chores a woman must do each day; it must be the priority of the entire family. Mothers who find themselves trying to work pumping, the use of an at the breast supplementer, and breastfeeding into their already full schedule will often find themselves unable to overcome the challenges of relactation.

Breast/Nipple Stimulation: There are several techniques for breast and nipple stimulation, perhaps the most successful is direct infant suckling. However, the mother can augment that with hand expression, breast massage, warm compresses prior to stimulation, and mechanical pumping. Some studies have shown that combinations of these techniques enhance success.

Milk Removal: Since the breasts synthesize milk based on the degree of emptiness, breast drainage must be a part of nipple stimulation. The mother may find that a period of trial and error is needed to determine the best strategy for breast emptying (infant suckling, hand or pump expression, etc…).

Galactogogues: Galactogogues are medications or herbal supplements that increase milk production/synthesis. The two most common medications used to augment milk synthesisare Metaclopramide (Reglan) and Domperidone. Both are anti-nausea medicines which increase prolactin production. Unfortuantely, scientific evidence demonstrating the effectiveness of galactogogues is weak. Both Reglan and Domperidone have been shown to increase prolactin levels and milk production. However, the studies demonstrating this lack credibility in the scientific community. As such, it is important that women who take these medication understand that while they may be helpful, they are by no means a magic bullet that will increase milk synthesis. The evidence in support of Mother’s Milk Tea, Fenugreek and Milk Thistle (all common herbal galactogues) is even more questionable. Given the subjective way that milk production is measured, it is possible that many galactogogues work through the placebo effect rather than by actually increasing activity at the molecular level. That said, the point is moot; the goal of relactation is to empower a mother to breastfeed her child and the exact physiology behind her success is not as important as her success. I therefore support safe and responsible galactogogue use under the supervision of a competent IBCLC.

Oxytocin: Oxytocin is the hormone that causes the Milk Ejection Reflex (MER), also known as the “let down” effect. It surges in response to nipple stimulation, and during pleasurable experiences (skin to skin contact, infant snuggling, and affectionate attention from a loved one). It is therefore, no surprise that stress, anxiety, fear, and pain all decrease oxytocin release. Oxytocin is also released due to conditioning responses, meaning that release is enhanced when mothers do things that remind them of breastfeeding. For example if you always sit in the same chair to breastfeed, the act of sitting in that chair will increase your likely hood of having an oxytocin surge. I often suggest that pump dependent mothers cover their breasts and pump with the baby’s blanket. Not only does this hide the pump and keep mothers from stressing over the actual movement of milk, but it also triggers a conditioned response to breastfeed due to the smell of the baby on the blanket. The important thing about oxytocin is to relax and enjoy the time spent breastfeeding, and as much as possible, the time spent pumping, hand expressing, massaging the breasts. A synthetic oxytocin is available in some areas through compounding pharmacies and can enhance the let down response.

Yes, you can relactate but you and your loved ones have to commit to it. The key physical factors needed for relactation are breast/nipple stimulation and milk removal. I can’t stress enough that in order to enhance the success of nipple stimulation and milk removal the mother must be confident in her abilities, comfortable and relaxed while nursing, and must have realistic goals. The mother must be supported and able to prioritize relactation. I strongly recommend that any mother having difficulty with milk production see a lactation consultant immediately to avoid weaning however, weaning does not have to be permanent. If you have stopped nursing and want to relactate, you can.

Jarold (Tom) Johnston, father of eight breastfed children, has spent his career advocating for the rights of fathers in the perinatal arena and has spoken on a variety of topics at conferences around the world. He is uniquely placed as a father, midwife, and lactation consultant, and brings that one of a kind perspective to his writing. He is a budding author with many ideas on integrating fathers into the birthing and breastfeeding process.