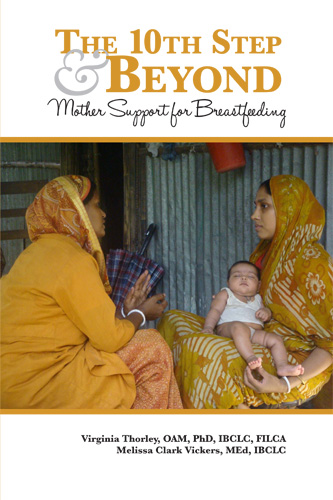 Mother support for breastfeeding has been my passion for more years that I care to admit, starting when Marian Tompson, La Leche League’s first president, provided me with the confidence and encouragement to reverse iatrogenic lactation failure and successfully breastfeed my first daughter. At the time, I was living in remote north-west Queensland and Marian was in Chicago, the other side of the world. There was no email or Skype, international calls were prohibitively expensive, and we did not have easy telephone access. So contact was by letter, supported by printed material – a newspaper reprint, “Mother’s milk saves baby”, and the LLL book, The Womanly Art of Breastfeeding, which arrived in the nick of time.

After writing and speaking on mother support groups over the years, the logical next step was a book of information on old and new ways of providing this support, drawing on experience from round the world. Finding the right co-editor was important, and friends in WABA recommended Melissa Vickers. What an inspired recommendation! Melissa was the ideal collaborator, with professionalism and heart, and we thought alike in so many ways. It has been a joy to work with her. We also had a small support team who acted as a sounding board – Rebecca Magalhaes (USA), Sarah Amin (Malaysia) and Paulina Smith (Mexico).

Melissa and I have brought together experienced people from five continents to describe
what is being done to support mothers to breastfeed in different situations and cultures.

Some chapters describe traditional mother-to-mother groups such a La Leche League,
the Australian Breastfeeding Association and the Scandinavian and Malaysian groups.
Others describe innovative approaches to mother support through the use of new
technology such as text messaging (MumBubConnect), a peer counsellor program in a
Neonatal Intensive Care Unit, groups for mothers of multiples, and the Baby Café drop-
in centres. Other authors describe how peer counselling programs have been developed
in a variety of settings, for example in Bangladesh, India, Paraguay and South Africa,
occasionally with male breastfeeding peer counsellors as part of the team. Steps to
encourage exclusive breastfeeding for the recommended six months, and breastfeeding
with complementary foods thereafter, are described by some of the authors. Finally, the
authors discuss why good programs fail and what is needed for sustainability.

Mother support is not only about providing a mother-to-mother breastfeeding support
group or a peer counsellor program, but it is something the whole community can be
involved in. This book provides ideas to get you and your workplace or community
started. The intended audience is hospitals, departments of health, non-government
organizations, BFHI committees at hospital, state and national level round the world,
and individual health workers and policy makers whose work involves the breastfeeding
mother and her baby.

The editors have donated their royalties to support the work of the World
Alliance for Breastfeeding Action (WABA).

“The 10th Step and Beyond is about supporting the mothers. Virginia Thorley and Melissa Clark Vickers have brought together a truly remarkable mix of 26 people, a team that reflects both the global character of the issue, as well as its multidimensional nature.”
-Professor Anwar Fazal, Chairperson Emeritus, WABA

How has mother-to-mother support impacted your breastfeeding relationship?

*** Watch this space on Thursday for a follow-up piece by Dr. Thorley’s co-editor, Melissa Vickers on the power of making connections. ***

Dr. Virginia Thorley has been involved in the breastfeeding field since qualifying as a breastfeeding counselor in 1966 with both La Leche League and the Australian Breastfeeding Association (then the Nursing Mothers’ Association). She certified as an IBCLC in 1985 and remains certified. She was inducted as a Fellow of the International Lactation Consultant Association (FILCA) in 2008. She is on the Board of Directors of the Lactation Consultants of Australia & New Zealand (LCANZ). A cultural historian of the history of medicine, she holds two research high degrees in History (MA and PhD) and has many publications.