By lactationmatters on 17 May 2012 in IBCLCs around the globe

The primary focus of my lactation practice is in the workplace.  Why?

The three questions I am most frequently asked are:

How often should I pump once I return to work?  Returning to work before your baby is six months old requires expressing milk approximately every three hours when separated.  For example, for an 8-hour shift you will be separated from your baby for about 10 hours (work, lunch break, commute).  Over the 10-hour period, it is recommended that you express milk three times.   Some sample schedules may look like these below.  Notice that I have added in morning (pre-work) and evening (post-work) expression sessions.  These are to assure that mother has enough milk to provide for the time separated and also designed to keep supply high and the mother comfortable.  Some mothers may find that they are able to breastfeeding their babies before they leave for work and right when they get home, making it unnecessary to pump before and after work.  It really is what works best for the mother and baby. 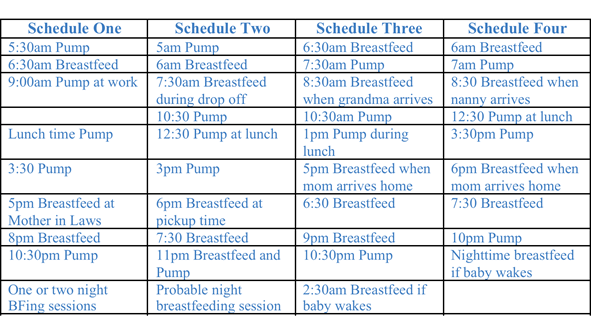 Once your baby is taking well to solids, you may have the opportunity to reduce the number of pumping sessions each day.  Remove the session that is the least productive for you.  Each session should empty the breast – approximately 15 minutes pumping time.

How much milk will I need each day?  Breastfed infants consume approximately one ounce (30ml) per hour when separated from their mother from age 6 weeks until age 6 months.  So, if you are separated for 10 hours Monday – Friday, I recommend providing the caregiver with 10 – 12 ounces (300-365ml) of breastmilk, although some babies may need more.  It is important to review appropriate feeding cues with caregivers so breastmilk is not offered at every cry, fuss or frustration.   Remember, this is only one third of the milk the infant will consume each day – the rest of her consumption will be directly from the breast and she will take what she needs when you are back together.  Many infants will reverse cycle feed thereby getting their primary calorie consumption in the evenings and nights.  Mothers should be aware of this and welcome it as a terrific method for maintaining supply.

How should I package milk and store for future use?  The method that seems to work best for the busy working mother is to start each week on Sunday night by removing 10 – 12 ounces (300-365ml) of frozen breastmilk from the freezer and thawing overnight in the refrigerator.  Milk can then be packaged for the care provider in small bottles (2.5 ounces for example (74ml) for consumption throughout the day on Monday.  The mother will then express milk on Monday.  Monday’s milk will be stored in the refrigerator overnight and provided for baby on Tuesday.  Tuesday’s expressed milk will again be stored overnight in the refrigerator and provided on Wednesday, etc. On Friday, milk is packaged in 1 and 2 ounce bags (30-60ml) and frozen, clearly labeled with the date.  Using this pattern, the baby will only receive frozen breastmilk once each week and the freezer supply will be efficiently rotated.  There is a tendency for less and less milk to be expressed as the stressful week progresses.  Freezing in small packages will allow mom to pull one or two ounces from her freezer on Thursday or Friday if needed without having to defrost and potentially waste 5 ounces (148ml) of frozen breastmilk.

Additional information may be found on-line:

Reassurance and support can make all the difference for these mothers.  Encourage networking with other breastfeeding mothers at work and plenty of skin to skin time together when mother and baby are home.

Wendy spent 15 years in the biotech industry in the Bay Area and worldwide prior to breaking out on her own and founding Lactation Navigation in 2007. Wendy has a B.S. in Health Services Administration from the University of Arizona and an MBA with a Marketing emphasis from the University of Cincinnati. Wendy’s daughter is twelve and her son is five. Both kids love to swim and enjoy bicycling. She is dreadfully fearful of spiders and enjoys spicy food any time of day. Lactation Navigation allows Wendy to combine skills learned in the corporate setting over the past 15 years with her love of breastfeeding. It allows her to spend time with her children and also with new mothers. It also encourages health and happiness for other families, and brings bottom-line profits to progressive companies.

73
By lactationmatters on 26 January 2012 in Uncategorized

We know what the studies say:  mothers who have to separate from their infants to return to the workplace are statistically less successful  (Johnson & Esposito, 2007) at meeting the goal recommended by child health promotion organizations around the globe:  exclusive breastfeeding until around the middle of the baby’s first year, thereafter supplemented with nutritionally sound, complimentary foods while breastfeeding continues through the child’s second year or beyond (World Health Organization, 2002).

This is not a significant issue for IBCLCs outside the United States, in nations where paid maternity leave is normal and expected after a mother has a baby; however, IBCLCs in the U. S. will likely find themselves in the position to counsel and assist mothers who wish to maintain a breastfeeding relationship with their infants after a return to work or school.  Reminding a mother that many mothers before her have been successful in continuing to breastfeed after regular separations from their babies and providing practical suggestions can be valuable.

Direct breastfeeding is best for mother and baby.

This is always my first tenet of support when I’m helping a mother who has to separate from her baby.  Is there any way for the mother to spend more time in her baby’s presence?

But I have to travel for my job!

While Transportation Security Administration rules permit a mother to travel with her pumped breastmilk when she is not traveling with her child, a more lactation-friendly alternative is to bring baby along and breastfeed whenever possible – often, this is more frequently than when mother is at her home office.  It has been reported that Julie Andrews, while on location to film The Sound of Music, had her toddler on site with a caregiver.  This was a sensible solution in 1964 and can still work today!

As an IBCLC, I support a mother in her efforts to breastfeed her baby; this can include practical tips for a new family.

If a mother can’t employ the tips shared above and struggles to express enough milk to meet her baby’s needs, remind her that she can still pump what is feasible for her – every drop her baby gets is a precious gift.  She can also continue to enjoy the breastfeeding relationship when she is with her baby, even if he has been partially weaned to commercially-prepared baby milk.

When a breastfeeding mother returns to work, she may feel stuck between two worlds; her heart is with her baby but her mind is on her job.  The other breastfeeding mothers she knows stay home with their babies and the mothers at her workplace weren’t successful at combining employment outside the home with breastfeeding.  If enough of your clientele combines working and breastfeeding, perhaps you can host a monthly discussion group (in the evening, baby required for admission!) where mothers can share their strategies in your presence (and you can moderate comments to ensure everyone leaves with sound information).  If your breastfeeding and employed population is smaller, see if one or two mothers who have been particularly successful at the balancing act might be willing to serve as a resource to other mothers embarking on the journey.

Turn your frustration into advocacy!

If you’ve seen too many overwhelmed mothers give up breastfeeding because the “otherhood” complicates new motherhood, take action.  In her Call to Action to Support Breastfeeding, U. S. Surgeon General Regina Benjamin encourages us to “work toward establishing paid maternity leave for all employed mothers” (United States Department of Health and Human Services, 2011).  A letter to your elected officials at every level will keep this issue on the table.  Breastfeeding protects the health of babies and their mothers; we are called to protect breastfeeding in any way we can.

Diana Cassar-Uhl, IBCLC and La Leche League Leader, enjoys writing to share breastfeeding information with mothers and those who support them.  In addition to her frequent contributions to La Leche League International’s publication Breastfeeding Today, Diana blogs about normalizing breastfeeding in American culture at http://DianaIBCLC.com and has been a guest blogger at Best for Babes and The Leaky Boob.  Diana can be found lecturing at breastfeeding education events around the United States.  She is pursuing a Master of Public Health, and upon graduation hopes to work in public service as an advisor to policymakers in maternal/child health and nutrition.  Mother to three breastfed children, Diana has served as a clarinetist on active military (Army) duty in the West Point Band since 1995.

If you want to link to Diana’s Breastfeeding Today article on breastfeeding and working, (mothers are the target audience) it’s here.